Of Weeping Angels and Weeping Chefs 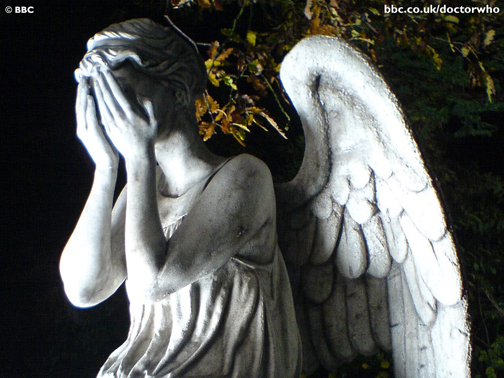 My two current televisual obsessions are Doctor Who (no surprise there) and Gordon Ramsay's Kitchen Nightmares (perhaps a little bit of a surprise?).

Of the latter, I go into it without delusions. I know what's going on. Every single frame of it is nothing more than a commercial for Gordon Ramsay, and I'm sure he wouldn't have it any other way. But its ostensible conceit -- the producers find restaurants that are on the verge of collapse, then bring Ramsay in to fix them over the course of four days, a process which usually involves fixing the owners as well -- is oddly compelling to me.

The foul-mouthed Ramsay generally finds disgusting food and even more disgusting kitchen conditions, on a level that make one think twice about setting foot in any restaurant, ever again. He also generally finds owners who are either apathetic, or deluded, or have lost their way in the daily grind. One, I would swear, was an undiagnosed Asperger's patient. He kept wandering around with a "deer in the headlights" look on his face, completely lost, while his father-in-law constantly berated and insulted him -- the opposite of a productive atmosphere. The show pays to have their kitchens cleaned and refurbished and the dining rooms redesigned, while Ramsay works over the menu, the chefs, and everyone else who gets in his way.

Except that sometimes he's been really nice. He seems to be a good judge of character, and a lot of what he does here is a combination of pyschotherapy and motivation. Sometimes the owners just need a good swift kick in the pants or a slap across the face, and he does not shy from delivering that. Other times they need support and a renewed sense of self-worth, and he delivers that as well, insofar as anyone could within the timespan allotted.

It doesn't always "take." Ramsay returned to a British Pub one year latter to find that the owner had reverted to his old ways and was alienating the staff and customers.

Regardless of the results, I can't seem to stop watching the damn thing. I keep seeing myself in the owners, and wishing that someone like Ramsay would come along and give me some motivation -- or a kick in the pants, or a sense of self-worth.

As for the Doctor, BBC America has been stripping the Russell T. Davies seasons at 5:00 PM weeknights, and I usually get home in time to catch most of it. It's a real mixed bag. Davies deserves kudos for getting the show back on the air, getting it a real budget, changing the format, transforming the show from a half-hour soap to a real prime-time contender. But also for hiring Stephen Moffat to write one story a season.

I don't like the Davies years well enough to spend $50 and up for the DVDs, but I have started going to Amazon, picking out the episodes that Moffat wrote and watching them full-screen on the new computer for just 98 cents a pop.

I've watched two of them now, and have been really blown away both times, actually applauding after last night's episode, "Blink." I'm sorry, but Davies isn't half the writer that Moffat is. I haven't seen writing this good on TV since the early days of Northern Exposure.

"The Girl in the Fireplace" is a virtual template for themes that Moffat would explore in greater depth when he took over the show. While checking out a seemingly abandoned spaceship, the doctor finds an 18th century fireplace that is actually a gateway into a little girl's bedroom. That little girl is being terrorized by clockwork automatons who scan her brain, declare that she's "not ready" and then leave. The automatons (and, now, The Doctor) reappear at various times throughout her life, and as the young girl grows to womanhood she finds herself falling in love with the curious stranger who reappears every time to protect her from the automatons. (and who never gets any older). As it turns out, she grows up to become France's Madame de Pompadour, and the automations want to use her adult brain to repair their ship. They've been building time portals into her life, and at last they've caught her at the ripe age. But if the Doctor closes down the time portals, he'll be stranded forever in 18th century France.

You see, it takes a long time to describe one of Moffat's plots.

If "The Girl in the Fireplace" is a thematic Statement of Principles, then "Blink" could well be the Pilot for Mofat's tenure on the show. It's remarkable in that the Doctor hardly appears at all. We're in the present day, while he's trapped in 1969 by  new series villains The Weeping Angels. This time, it's up to a girl from the present day who's never met the Doctor to get information to him in 1969 so that he -- get this -- can record a video that will one day be inserted as an easter egg onto 17 DVD titles; a video that will get information to the girl in the present day that will allow her to defeat The Weeping Angels and free up the Doctor's TARDIS.

Are you following this? Trust me, it doesn't even begin to cover all the wrinkles that Moffat gets into this story.

It is brilliant and clever and it takes the show to a whole new level. The original Doctor Who was not for everyone. It was cheaply made and eccentric and sometimes long-winded. I loved it without reserve in nearly all its incarnations, but could completely understand why lots of folks walked away.

This is different. If you've never seen the show, or if you've seen it in the old days and had enough, get your hands on a copy of "Blink" and start there. It's been many moons since I've seen something that made me want to grab people by the shoulders, push them into a chair and say, "Just sit down and Watch."