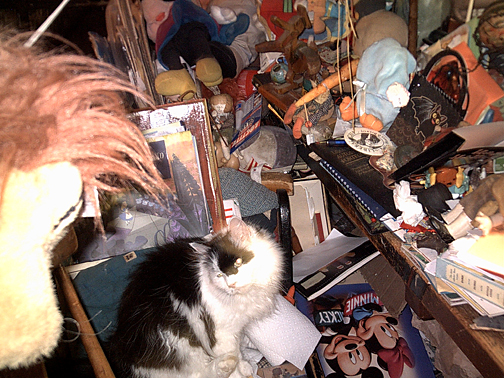 It's so ironic that the virtual end of the move and the transition falls, almost to the day, on the anniversary of my own personal Hiroshima.

Exactly one year ago today, I came home from work to find that my mother was not sitting in her usual place, in her cat chair in the kitchen.

(You can't see it very well, but my cat Patches, self-proclaimed Queen of the Universe, is sitting in it in the photo above, taken in the old house at the height of its clutter.)

This would not have been such a distressing thing, had it not been for the scene I'd experienced that morning, described a few posts back.

There were empty cat food tins overturned on the stove. The kitties had not come to greet me as usual. The television was playing to an empty room.

I ran into my mother's bedroom hollering, "Are you all right?" and heard, faintly. . .

I found her sitting on one of her stools at the end of her bed, slumped against the bedpost, breathing hard.

I called 911 from the phone that sat in the pile of dolls and stuff at the foot of her bed. They stayed on the line with me, and I stood with the receiver in one hand held to my ear, holding my mother's hand in my left, until the ambulance arrived.

It took half an hour, and when they came, unfolding their massive stretcher in the yard, I hollered at them, "There's no way you're going to get that in the house."

Damn. I mean, I could have done that. I could have walked her out to my car, and driven her to the Emergency Room, and I could have saved half an hour, and maybe that would have made the difference.

Damn it. Damn it all. Oh, god, it could have made all the difference.

That night, she and I both believed that she was still going to survive this.

I'm going to post some music over the next few days, Highly Illegally.

So, let them sue me.

Here's the music for tonight, Let me know if it doesn't work.

To my knowledge, my mother only heard this song once, and it moved her to tears.

My first thought was to play it at her Memorial Gathering, but I made the decision early on that there would be No Sad Songs at that Event.

It will already be known to some of you. It's one of my favorites.