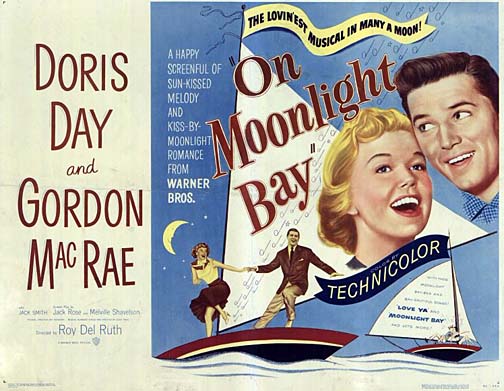 On Moonlight Bay is just the sort of picture that my mother had in mind when she complained about modern movies back in the 'seventies and eighties as being so serious and self-important.

Back when she and her family went to the theater most every Friday night, the movies weren't about proving anything or making a point or even about exposing the dark underbelly of any damn thing. They were all about entertainment, and having a light, refreshing, relaxing time, and enjoying yourself for a couple of hours. They were about songs and color and Romance. You didn't go to the pictures to have the weight of the world thrown down on your shoulders -- you went to have it taken off.

On Moonlight Bay (which just aired on TCM) does all of that good stuff. As movies go, it's strawberry sherbet.

I must say that I love the way that directors and photographers used color in those days. On Moonlight Bay is a good deal more pastel than other Technicolor movies of its day, but it's still vibrant as an Easter basket full of eggs. You knew you wren't looking at black & white, and you knew you weren't looking at Reality.

I guess that's what my mother really meant by those comments, all those years ago. The movies she enjoyed weren't about Reality at all. They were about wafting you away on a dream: of a Reality that was close enough to touch, but so very far away.

For my part, it's hard not to like the Homey Charm of this picture (it was Beyond Nostalgic even in its day, and today it presents a completely Alien World through its shocking pink rose-colored glasses), and there are some real laugh-out-loud moments, and the songs are great fun, and the Art Direction really settles you back in your easy chair, especially if you have Quats to sit on you.

And that Doris Day! Va-va-va-VOOM! How long has it been since I saw a Doris Day movie?

Let's just say that my hormones had not yet kicked in, and at this point in my history they have not yet completely died off.

I liked Doris better as the Tomboy than as the lovesick gal (don't think anyone else could look better in an oversized sweatshirt and jeans), but I must admit that if a lovesick gal like that threw herself at me I'd roll over on my back and wag my tail (a line I steal now and then from Raymond Chandler).

After the picture, Robert Osborne's re-telling of a Vincente Minelli remark ("I knew Doris Day before she was a Virgin") really pointed up the dichotomy in her image, and probably in her personal life. I'm reminded of a song that I think was cut from the egregiously bad movie version of Grease:


Watch it, hey, I'm Doris Day
I was not brought up that way
Won't come across
Even Rock Hudson lost
His heart to Doris Day!

Anyway. It's been a few weeks since I curled up with an old movie, and this was a good one to curl up with. It's deceptive: because a lot of skill and craft was thrown at it from every which direction, but it wants nothing more than to please.