Things that Make you go "GAH!" 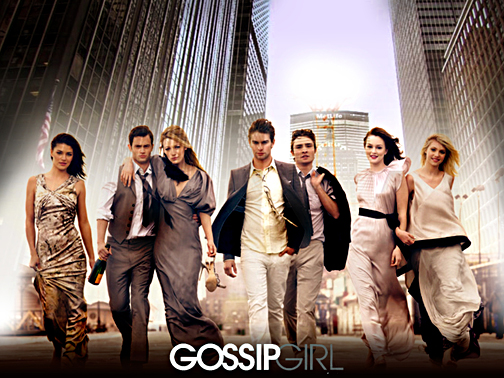 As an alumni of C____ College, Cicely von Zeigesar came to speak and read from her books this week.

She has her fans among the student body, although, as it was pointed out to me by one of my student workers staffing the event, they all tend to look like the people on the covers of her books.

I wrote about von Z. a couple of weeks back just to say that the kind of people she writes about are exactly the kind of people that the movie Heathers so gleefully kills off! Which is kind of harsh -- sometimes I think all they really need is a good spanking.

It turns out that she never thought about becoming a writer and that Gossip Girl just dropped into her lap, was not even technically created by her. .Again, as reported to me by my student informant, the way von Z. tells it is that she was working in a cushy job at an Agency or a Syndicate where her duties were basically to do nothing all day. Until the time when an editor came out of his or her office, handed her a sheet of paper and said, "Write up an eight-page outline about these characters and send it to Little, Brown." At that time, there was "nothing on the market written for or about rich kids in the city," and this was the beginning of a loose concept to -- I'm already starting to gag -- fill that void.

von Z. had never written anything professionally before, and didn't know how to make anything up, so she sat down and wrote about the people she went to school with.

And another rich and famous "author" is born.

Do I need to tell you how galling this is to someone who worked for years to pursue a writing career and got nowhere?

She was literally at the right place at the right time. God waved his magic wand, said, "The world needs a series about arrogant, rich brats," and there you are!

But there is something worse I have to tell, and surprise! von Z. is actually the victim.

I am told by two separate students that the English Department, the very people who presumably invited von Z. to speak, have been publicly mocking her to their students both in the days before the event and during the event itself.

One professor was quoted as telling her entire class how awful the Gossip Girl books are and what a joke von Z. is. Which may be true -- in which case, why did you invite her? Presumably no one was holding a gun to your head.

During the event, while von Z. was talking (and talking and talking -- this was to be a co-reading, but von Z. took up the whole time), the English Department, I am told, sat behind her where they could not be seen, and snickered, and gestured, and mocked her literally behind her back.

I don't care how bad the books are, this is just bad form and not something that a college professor should stoop to. If nothing else, the woman is an Alum and as such the Professors should act as an example to the current students.

I'm sure that they are just as jealous of von Z. as I am, and that this is how it manifested itself. But for my part, I reserve the right to post honestly about her on my personal blog, but when she came to the store to sign books for me I damn sure took a respectful tone. It's what you do.

Robert B. Parker was another egregiously untalented writer who happened to be an alum of this college. I had the displeasure of typesetting some of his books when I worked in the production department of Thorndike Press. His novels were labor intensive because every one of them consisted of about a hundred and eighty-seven chapters of two pages each. I sell his books here, and I'm not a fan, and I tell people so, but that's the way I say it: "I'm not a fan." To go into detail and make fun of his work to another alum or anyone associated with the college would be inappropriate.

Rule number one: a professional person should behave like one. No matter what we think about her work, von Z. handled herself with grace (even inviting one of my students to visit her office in New York this summer) and the English professors could take a lesson from that.