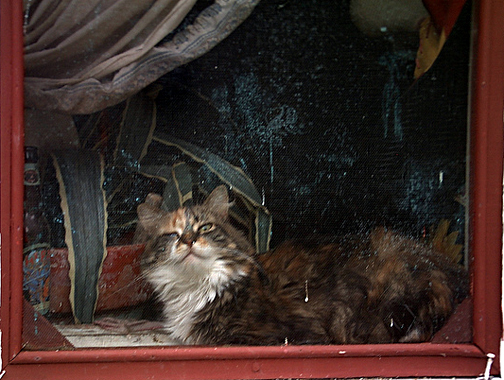 Kennebec Vet has gone all Yuppity on me in the last few years. They used to be a real country Veterinary, owned by a couple of crusty old gents who did the best that they could and treated the animals well, but who didn't believe in mollycoddling the pet "owners," if you get my drift. A while back they were bought out by a significantly younger crowd, who moved the office into a flashier, upmarket location, spent a lot on money on bells and whistles like computer touch screens for the visitors to play with while they're waiting, and so on. The assistants are now called "techs" and they wear hospital uniforms and specialize in telling you obvious things in soothing tones -- it stops just short of hand-holding. Caring and Sharing is now as much a part of their agenda as rendering your Quat heat-free.

I hadn't been there since Mom died, and so L____, the only holdover from Kennebec Vet's pre-Valley Girl Days, got the news for the first time. It's funny how taking my little Honey to the Vet dredged up a lot of emotion that, obviously, hasn't been put all that far behind me.

I'd noticed that Honey was drooling a little bit in the past couple of weeks, but it didn't appear to be anything serious until this weekend, when a lower canine suddenly jutted out of her mouth and started causing her some trouble. I thought that it might just drop out (they sometimes do) and she'd be fine. On Sunday night she still seemed pretty normal; but by Monday night she was clearly in pain, and not eating anything even though she wanted to.

On the one hand, as Whitey had shown us a while back, the tooth-pulling procedure is fairly straight forward, and something that cats bounce back from pretty well. On the other hand, I've learned that surgery is surgery, and any time you take a cat to the vet (or a human to the hospital) Complications can arise, and you may end up not seeing your loved one ever again. Of course you should never think along those lines, so of course I did. The Quats are just about all that held me together during the last year, and Honey is extra special to me. In some ways I am still smarting from the last Big Tragedy, losing Honey would be another blow that couldn't be shaken off easily.

She cried and cried on my lap all through the (thankfully) short drive, but once we were inside and being cooed at by the Designer Vets she behaved like a regular sweetheart, even through indignity of having her temperature taken. A lot of time was spent explaining this and that to me (they now charge a walk-in fee -- when did that happen?), but the actual checking in her mouth was cursory, as I knew it would be, I knew where we were headed well before the vets did.

What surprised me was that they could take her right away, and that I wouldn't have to leave her overnight. That was a relief.

During the drive home it was my turn to cry and cry. Like I said, this opened up a whole fresh can of Emotions.

They ended up pulling ten teeth, and they didn't even need to suture her because they came out so easily. The operation was over by ten-thirty or eleven, and I picked her up on the way home from work. She was out of the anesthesia, alert, looking cute and obviously happy at being out of pain. Of course she cried and cried all the way home, but it was a sign of how well she's adapted to the new house that when I set her down she sniffed the air and went around checking it out, just to see that she was Actually Home.

She was eating soft food in nothing flat, purring and making her little rolling mew sound just as if nothing had happened to her.

By this morning the pain killer they'd given her had clearly worn off, and she was working her mouth a little bit. I gave her the antibiotic and the pain killer that they sent along with me (she's not the easiest quat to give medicine to, but not the worst, either); then I had to hie me into work.

It all meant another $340 hit on my credit card, but some things you just can't question. When it comes to my little Honey, who still wants to snuggle with me every morning, the Stepford Vets have me over a barrel.
Posted by Freder at 1:25 PM