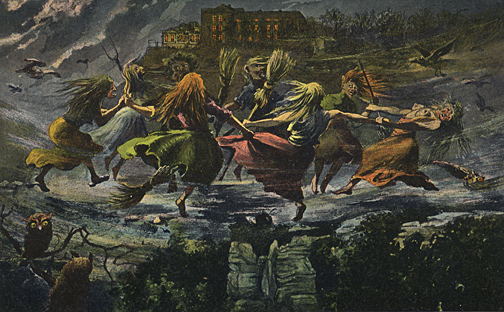 I like Halloween so much that I celebrate it twice a year -- sort of. The German holiday Walpugisnacht falls on the last night of April, and although it's celebrated differently, it contains similar themes. I'm aware that this isn't the authentic interpretation of the holiday, but for me it bookends both Halloween and the seasons. If Halloween represents the rise and unleashing of Evil (winter), then for me Walpurgis Night can serve as the time when when that evil is put down and fettered up again, at least for a time, until the cold winds start to blow down  our spines again. It's another sign of Spring that I look forward to every year.

So it's only appropriate that on my last two days off I've spent at least some of the time working in my Halloween Room. It's coming along nicely, getting quite Spooky -- and yet, to me at any rate, it's a cheerful, jolly, warm room. . . not gruesome at all.

Today I strung a wire through the width of the room, so that my large toy figure of the Japanese monster Rodan could appear to fly over the bed. It was useful for other hanging decorations as well, and really adds a lot. I kept a lot of vintage paper Halloween goods, and many of these went up on the walls, also on the Halloween Tree that sits atop one of the two dressers. I got a lot of the jumble cleared away, and the beginnings of a Halloween village on top of the other dresser. Got the bed largely cleared off of the stuff that I had strewn across it. Funny, but in this process I tend to use the beds as temporary work tables.

No pictures yet. There's still a way to go.

The process is actually a lot of fun, because I'm not just unpacking things and putting them in drawers or closets, but decorating and designing as I go. It gives me a real sense of accomplishment to see the difference after a few hours of work.

There are still multiple boxes and bags to unpack in there, but little by little it is coming together.

Next is the Studio, and I rather dread that. It's the biggest job of the three bedrooms upstairs, which is why I did the Playroom first, and now the more ambitious Halloween Room.

I haven't yet done any season-appropriate programming. I think I'm going to remedy that tonight!

Back to work tomorrow, into a week that's more fully-packed than normal. But seeing things steadily come together on these days off fills me with a sense of accomplishment that I haven't experienced very often in my life, especially in the last few years, when it seemed that everything was coming unglued at once, especially me.

It was grey and rainy all day, but this bothered me not at all. It took the snow away before my eyes. I stayed inside and worked. About the only thing that depressed me today was opening my credit card bill! It cost me nearly $2,000 to heat two houses during the month of February, and I bought the washer and dryer, and these things landed on my card like a two-ton weight! It's not over yet, either! I have to get the car inspected in the next couple of weeks.

Now, that's scary! You may hear me howling again yet.

Email ThisBlogThis!Share to TwitterShare to FacebookShare to Pinterest
Labels: Halloween