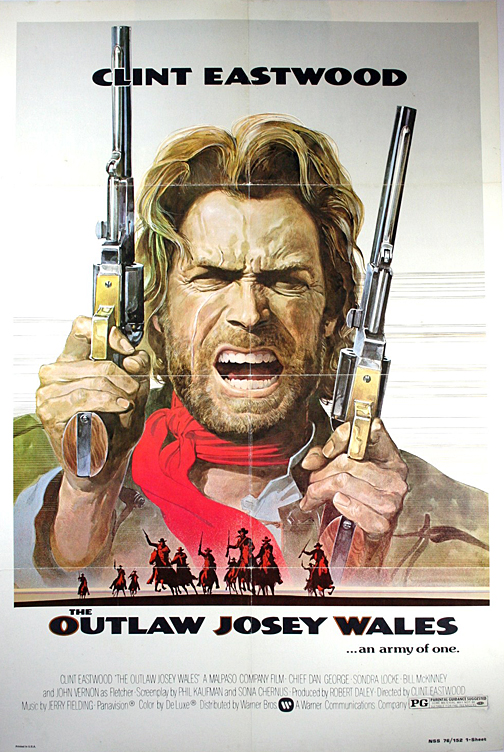 Yup, you guessed it... I got sucked into another TCM Programming Vortex tonight.

The Outlaw Josie Wales is a movie that came out in what I'd laughingly refer to as "My Heyday," and one that I never saw at the time. So this was like filling in a gap.

On the one hand, I had to admire the craftsmanship. This is a really well-made picture, kudos to Mr. Eastwood, who took over directing in hard circumstances. Just to compare apples to apples, The Outlaw Josie Wales is far more skillfully made, written and acted than anything I ever saw by Sergio Leone, whom everyone seems to like but whom I think is a nasty, grotty little sleazeball.

In particular among the cast, Chief Dan George is a delight to watch, Eastwood should get down on his knees and thank god for that man.

But, as you might have guessed by now, I have a problem.

This picture is all done up in Civil War costume -- but (we'll leave elements of the ending out of this) at its heart and for the main part of its runtime, this is a Revenge picture, pure and simple.

And here's the thing: in order to justify the actions of the hero, which are pretty danged horrible, the villains of the piece have to be presented as being absolutely depraved.

I don't like that the actors do such a good job of being depraved and, apparently, don't have any trouble sleeping at night.

I don't like watching it, and I don't like being made to feel as if I'm morally complicit because I'm watching, as "entertainment," acts that go beyond the realm of violence, into humiliation and degradation.

I know that stuff like this actually happened. In a documentary context, I could watch and not feel like I was being manipulated, used and abused.

And -- what do you say about a director who asks his GIRLFRIEND to participate in some of the scenes that Sondra Locke endures here?

There are some redeeming scenes. Wales's confrontation with the Comanche chief that saves lives all around -- that's a great scene. And the ending, with Wales and the Southern officer more or less coming to terms rather than blasting their way to one or the other's death -- that is Exactly Right.

But in nearly every other aspect, The Outlaw Josie Wales caters to, not to say glorifies, not to say revels in the conventions of the very nasty Revenge genre. And it's frustrating to see so much talent being thrown in the direction of Plain Ugliness.