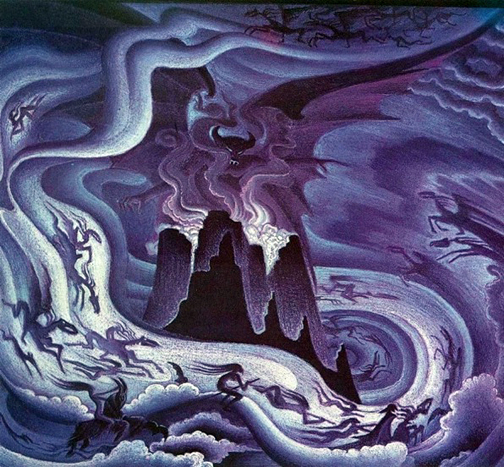 So hard to believe that this is the last night of April, that this is the night where the winter demons are laid to rest, that another year has gone by in a blur of tears, disorientation, and regeneration.

So it's appropriate that tonight I'll celebrate with a new (to me) Doctor in a brand-new Doctor Who adventure. My initial reaction to Matt Smith as the 11th Doctor is overwhelmingly positive. Though the youngest actor ever to play the role, he captures the characters combination of youth and age, wisdom and play. I like him better than what I saw of David Tennant, and I like the scripts that he's been given to work with better than anything that Tennant had.

Someday, my old Who website, "The Prydonian Order" will reappear as part of the new www.ducksoup.me, and I have a feeling I'll have something new to add when that day comes.

Earlier in the week, I took the time to sit through a couple of '50's SF monster movies, not really ideal Walpurgis Night fare, but the things that came to hand. The Monster That Challenged the World at least had a good and genuinely repellant monster in the form of a giant caterpillary-earwiggy kind of thing with creepy bulbous eyes that lays eggs that hatch a bunch of other giant caterpillary-earwiggy kind of things with creepy bulbous eyes. Yuck! It's too bad the rest of the movie is so lame, strictly by the genre numbers, with Hans Conried being the only real actor on hand to hold the thing down. He fails.

It! The Terror from Beyond Space was just the opposite. Oh, the actors were still bottom of the barrel, and the script was typed by someone with a lead ear, but the concept has possibilities for claustrophobic horror that were not realized until Dan O'Bannon stole the idea brazenly for Alien.

But that monster! Ye gods! Poor Ray "Crash" Corrigan, reduced to lumbering around in a pathetic rubber suit, waving his arms like there's no tomorrow. Perhaps, for him, there wasn't. . .

Before the Doctor comes to call, I'll re-visit Beetlejuice, which I have not seen since its original theatrical release, all those years ago.

'K, I've got to run and get my dinner going so that I can get the "celebration" started. I'm sure at least three of my quats will sit on me, and that's relaxing for all of us. The regenerating me will raise a glass to the regenerated Doctor -- an old friend with a new face, who always brings monsters.