Big Change in the Weather 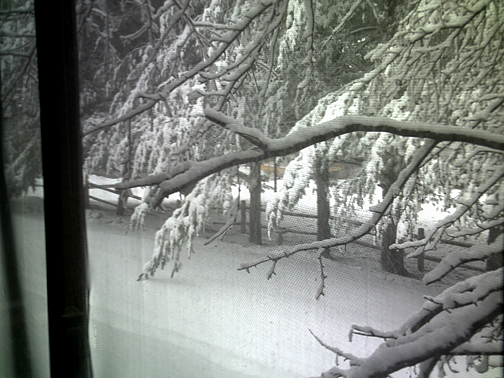 Unfortunately, the Weather Weenies and Wenches were right about this one! The last (one can only hope) snowstorm of the season is a doozy. You're looking at a picture snapped 45 minutes ago from my porch, and it's gotten worse since then. As you can see, the snow is so wet and heavy that it's weighing down the branches of my pine trees to the extent that they actually obstruct the driveway! When I was out shoveling the steps a little after ten, I heard the distinct crack of a branch snapping. Mainers who weren't born yesterday know what this means: there are going to be power outages, perhaps significant and lengthy ones.

In the big Ice Storm of, I think, '89, we were without power at the old house for fourteen days. Today is another day that I'm glad I'm not out there!

I have some Juicy Gossip to report. Tiger Whitestockings seems to have found herself a beau!

When I took her food out this morning I was surprised when she crawled out from under the deck and struggled up the stairs through three plus inches of snow to meet me. I was even more surprised when another cat came after her.

He was Big. He was Yellow. And when he saw me, he got a Stupid look on his face.

That's right: Whitestockings's taste in Men hasn't changed! This guy looks like he could be Big Stupid Yellow Cat's younger brother and Junior's pampered uncle. My jaw dropped. So we were both crouched there, staring at each other with stupid looks on our faces.

He turned and ran back under the deck, and instead of staying and eating her breakfast, Tiger Whitestockings went after him. When she couldn't find him, she stood below the deck, looking around anxiously.

So, it's serious! She's found herself a New Junior. Sort of tells you something about Human Nature.

One of my tasks for this day off is to continue, at a pace, working on the new site. This will give you an idea of how small I'm starting and how much I have ahead of me. I decided that the earliest chapters of Tinsel*Town, my graphic novel in progress, should appear under the original logo. But there were a couple of things I didn't like about the original logo, and even the revised logo that replaced it had legibility problems and was smaller than what I wanted for the new site.

So I re-made it, from scratch. in Adobe Illustrator. The original was hand drawn, many years ago; this version is all CGI, although I tried to preserve some of the hand-drawn look. The possibility exists to import it into Flash and animate it ever so slightly. I'm going to think on that one a bit. It's probably better to get the basic site designed and uploaded, then work on dressing it up as time allows.
Many, but not all, of the other graphics found around the old site are going to get the same treatment, some more dramatically than others. Before I put together a single page of the new site, I'm going to get the bulk of the graphics in place.
In the meantime, I broke down and bought a copy of Adobe Creative Suite 5 Design Premium All-in-One for Dummies. I just needed some real, printed-on-paper documentation that I could sit down and read, and the official books from Adobe appear to be little more than tutorials in book form. I have no patience whatever  with tutorials -- can't see the point in spending time playing with imaginary projects when I have a real one right in front of me that needs my attention.
Although I'm only 50+ pages into an almost 1,000 page book, I've already picked up some useful knowledge -- and confirmed my suspicions about the "Bridge" program -- that it's completely extraneous. I've been doing this long enough that I can manage my own files, thank you very much, and unless Bridge can pull out a little electronic chair and whip and make those files climb up on their hind legs and jump through hoops I don't have a use for it!
So, today is for staying indoors, fixing my lamp, working a bit in the Halloween bedroom, poking some site graphics into shape, and reading some more about the software. Oh, I still have my taxes to do as well, but that ought not to take long.
I'll keep you posted on Whitestockings's newfound Love!
-- Freder
Posted by Freder at 12:00 PM