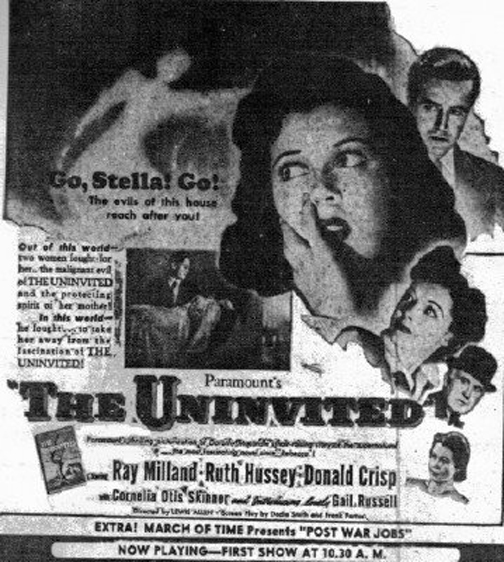 As this crazy work week drags to a close, I made the conscious decision that I wasn't going to stress out about anything today -- that's why I'm actually taking a lunch break to write about The Uninvited, which aired last night on TCM.

This was right up my alley for the month of April: an efficient little unpretentious chiller that has a couple of nice jolts, but also some gentle humor, and which is more character-driven than most. You have to like a movie where Alan Napier (Alfred from the Batman TV show) gets the girl at the end. OK, Ray Milland got the other girl, but Napier got the better deal.

It's easy to see why Milland isn't as well remembered today as some others of his period. He's clearly a major talent with a wide range of tools, including an easygoing sense of comfort in his own skin, but there's nothing iconic about him as there was about some of the other major male stars -- unless it's simply that he's an iconic average American guy.

His relationship with his sister in this movie is a little bit weird, but necessary structurally if you're going to have a female lead who's a spectator, not a participant in the haunting, and not a romantic interest for Milland (whose character is something of a cradle-robber in this picture).

I could be wrong, but I think The Uninvited is unique in that it's got a Good Ghost and a Bad Ghost trying to work their will, and there's some question about which is which. But I wish that real-life ghosts, who to my way of thinking are creatures of the mind and memory, could be dealt with as easily as Movie Ghosts: just solve a few problems for them, work out a riddle or two, then ridicule the Bad Ghost (Poo-Poo! Begone! We Don't Like You!") and suddenly everything is Hunky-Dory.

Modern viewers might cringe a bit to realize that the main human villain here (played as close to flamboyance as this picture goes by the squirm-inducing Cornelia Otis Skinner) is clearly a lesbian, and that this was how homosexuality was commonly treated at the time: as a lurking evil waiting to sink its claws into unsuspecting "normal" people.

As much fun as watching the picture was Robert Osborne's brief conversation at both ends with Chita Rivera, who was picking the movies last night. This was a little bit like watching the old Mike Douglas / Merv Griffin style of chat show that went the way of the Dodo many years ago. She wasn't promoting a movie or a book, just sitting down and sharing some memories surrounding her choices. She made some good choices, too, just wish they had changed the order in which they aired. I own a copy of Frankenstein, have seen it many times, and was planning on being in bed by the time it ended! Maybe I'll have to invest in one of those DVR thingummies. But I druther not. One more gadget.