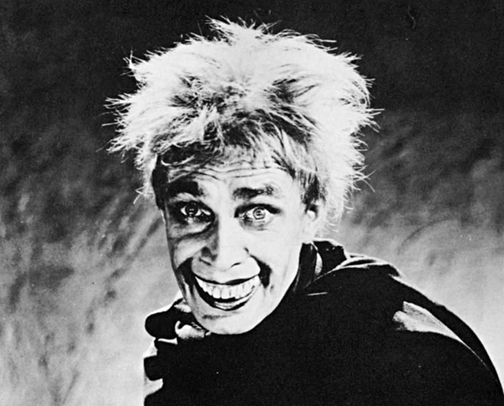 The Man Who Laughs must be one of the most casually grotesque movies ever made. Excepting only Mary Philbin, everyone in it is hideous, especially including Olga Baclanova, who could be prepping herself here for her work in Tod Browning's Freaks. The light that comes into her eye as she forces Conrad Veidt to lower his cloak is probably the most horrifying thing in the picture.

Even with Paul Leni at the helm to explain it, it's hard to believe that this is a product of Hollywood. The Man Who Laughs is as German as they come, baby, and no two ways about it. It's Caligari with a budget.

And yet I found it curiously uninvolving. I've had that problem with Leni's work before. Everything about its appearance is terrific, but Appearance is all that it's about, and we get the message early on. At an hour and fifty minutes, I found it impossible to get through in one sitting. The parade of grotesquerie combined with the inevitability of the plot was just too much.

It's possible, too, that the type of disfigurement is a problem. Why is the Hunchback of Notre Dame sympathetic, while The Laughing Man is not? Is it because Quasimodo is so challenged that he doesn't even understand why he's being whipped, while Gwynplaine, the title character here, is intelligent and seems to be asking for what he gets? We are repeatedly asked to feel his pain, and I wasn't buying.

The one thing I was not expecting was a Happy Ending. A final fade-out with everyone reunited, hugging all around weeping tears of Joy -- in Victor Hugo?

Thankfully, the DVD includes, as an extra feature, some text from the end of the original novel, where it's revealed that Leni and Universal didn't so much change the ending as lop off about four pages of Hugo's Purple Prose. Oh yes, everyone is Happily reunited -- but then the girl dies of a heart attack and Gwynplaine throws himself into the ocean and drowns. Now, that's more like it!

You left out those minor, nagging details, Leni! And, literally, in the end it kills your picture.

Conrad Veidt gets a special medal for his performance as Gwynplaine. Most likely, it should be a Purple Heart: the device that distorts his mouth has got to be an instrument of torture. And to convey so many other emotions with, essentially, the whole lower half of his face taken away as an instrument had to be a challenge. Veidt delivers, and it's hard to understand why this picture didn't make him a major star.

Just by the way, is there anyone out there who does not know that Jerry Robinson used Veidt as his model when he created The Joker? Just thought I'd throw that out there as my daily entry into the Bleedin' Obvious.

The Man Who Laughs is probably not a movie that I should be watching at this moment in my history. I ordered it up about a month ago, before the latest blow came. That I wasn't particularly bothered by it says more about the movie's failings than it does about me. It's all face, no feeling.