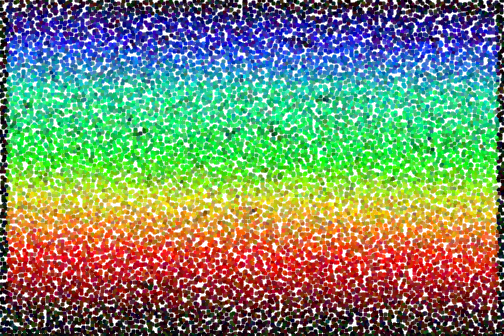 "On the spectrum" sounds like a nice place to be, a place full of color and light. That it may be, but the closer I look at that place and the further back I go in time, the more I see the little cracks and disconnects that I've been falling through all of my life.

I actually tried to tell people at various times. I remember writing to someone that my entire life was "falling between stools." It's the reason why I'm incapable of writing in any specific genre, check out the fiction I've posted if you don't believe me. It all  has elements of mystery and fantasy and literary fiction, but it doesn't fit neatly into any of those categories, which makes it hard to get published.

I never knew what "on the spectrum" meant, although I saw it at work on books, especially Growing Up On the Spectrum. I never heard of "Asperger's Syndrome" until I came to work in my current job, and didn't know anything substantive about it until last week. I'm 52 years old. When I was a little kid, nobody was making that kind of diagnosis -- no wonder that the doctors and behaviour therapists and, ultimately, my parents, all threw their hands into the air and essentially gave up on me.

Today at work, I was deeply focussed on pulling a return when a student came up behind me rather too quickly and aggressively for my comfort zone and then paused behind me meaningfully. I immediately dropped into the character that I play in front of other people: the person who smiles and says hello, the person who seems to care about someone else's needs, the person who appears to know the answers, the professional person, the normal person.

The fact is that I don't give a good god damn about helping them, but I have to make believe that I do in order to hang onto my job. It does not come naturally or easily to me; it's a second self that has taken me years to develop, a costume that I wear when I am out among the living. It's a coping mechanism, a completely artificial construction, a cracked mask that I have to wear to "pass" in the Real World. It's one of the behaviours common to Asperger's Syndrome. I use it even with my oldest friends. The alternative would be to go and find a corner to hide in, and people who do that don't survive in the real world.

The one normal thing I do have is a survival instinct.

I was lucky today; I happened to know the answer to his question, and I was able to give the programmed response, and even fake a laugh when he said something that I didn't catch, but which was obviously intended as humor. I've learned over the years that if the response is generic enough and appropriate enough, you don't actually have to understand what people say to you. Laugh at the right time, and eventually they'll go away and leave you alone.

One of the things I read today in Growing Up On the Spectrum was that, for autistic or Asperger children, Time Outs don't work as a disciplinary measure. Boy, do I understand that! I used to love being sent to my room! My room was a complete world for me. As the book points out, Asperger children enjoy being alone. It means that we don't have to interact with other people. If you want to punish an Asperger child, deposit them in the middle of a group of strangers and order them to Make Nice.

Asperger's is made up of a list of behaviours (as opposed to symptoms) as long as your arm -- and, to varying degrees, I display them all.

A good friend asked me yesterday "Have you been to a doctor or are you self-diagnosing based on an online test?"

As usual, my answer to her is complicated. (Nothing about interacting with others is simple to an Aspie).

If you get a pain in your side, you have to ask yourself, "What the hell is that?" 'Cuz it could be a lot of things.

That's where I am right now. It's clear that if I have or want to prove to someone else that this is the case, I will have to find a way somehow (don't know where to begin) to get a diagnosis.

If it was just one or two things, perhaps I would still be asking, and if you have to ask, it probably isn't so.

But it's everything. It even explains the things that I thought were the explanations -- but which are really just more indications. I have a couple of books on order and I will continue to read and pursue this and try to find some clarification.

But I'm not asking anymore. I have a cold. Now to deal with it -- somehow.