Pictured above is a side panel from one of the boxes I unpacked late this week. My mother had filled it with a wide range of her smaller creations -- candlesticks, necklaces and the like -- and then stowed it in the attic, lord knows how many years ago. When I found it, I exclaimed out loud: "Mom!" -- and of course it came with me.

It's hard to date this box, but it probably goes back to the late '70s. 9-Lives hasn't used that logo or design in longer than I remember. It's too bad; I like its retro stylishness, and the winking cartoon quat. You don't see many cartoon mascots for products anymore (although I've noted that Speedy is still around, and Mister Peanut never really left --  just changed his appearance a few times).

Can anyone else remember some cartoon mascots that have retired to the old mascots home, or ones that are still around?

The now-defunct (?) Hamms Beer, a local Midwestern brew, had a bear character that I always liked. We used to have a ceramic display piece featuring the bear. Haven't seen it since we moved from Southern Maine, but I popped onlike just now, and lo & behold, there was a picture of it: 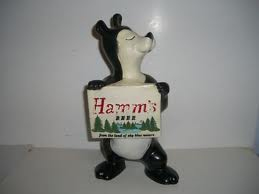 Changing styles in advertising, clothing and design have always interested me, and I sometimes marvel at things like the 9-Lives box that once looked contemporary to us, but now, clearly, belong to a different era. Even the terminology has changed: "Tuna and Chicken parts" is much more open and honest than anything you see in these days of Designer Cat Food when "Tasty Temptations" and "Fancy Feast" are more likely what you see on the shelf. Back then, Quat Fud was Quat Fud.

That box goes back to the time when we had, get this, more than thirty cats outdoors, and close to twenty more indoors. My mother bought between three and five CASES of cat food every week. And as you can see on the box, there were twenty-four cans in each case.

When we fed the outside quats, we put down two big trays of food, each with at least three cans of food and whole mess of crunchies mixed in. A whole bunch o' quats would circle each tray. It was like feeding a bunch of small, furry pigs.

At that time we also had two dogs, two horses, one pony, a goat and a flock of sheep. The horses and pony were for my sister, but guess who had to help out, and guess who got stuck caring for all of them when she went away and got married? Sandy, her male palomino, hated all men, had probably been abused, but he ended up liking me better than he did her. I was the only man he ever let hug him around the neck. I was the only one he trusted, and I led him to his death.

That still haunts me to this day. He's buried at the old house, another sad memory to leave behind.

As for the cats -- one summer, I'm guessing it was in the early or middle '80s, a terrible disease swept through the yard. It killed quickly. It seemed as if a couple of times a week there was a new body for me to bury. By the time it was over, there were only about eight or ten hardy quats remaining. With comings and goings and people dropping their kittens on us, it stayed at around that number for a long time. It was only within the last decade that it got down to around six, then five, then four, then three, and finally Junior was the last to disappear. I wish he could have made it through the move. He was a sweet guy.

On her deathbed, my mother said, "Bring them in." I think she meant Junior, Whitestockings and Grumpyface.

But how could I? Grumpyface is too wild, Junior was an unspayed male, and I did try with Whitestockings. Longtime readers of this blog know how that turned out.

It's funny how something like the side panel of a cat food box can take your mind down some long-abandoned, branching pathways.

Email ThisBlogThis!Share to TwitterShare to FacebookShare to Pinterest
Labels: past things, quats, regret