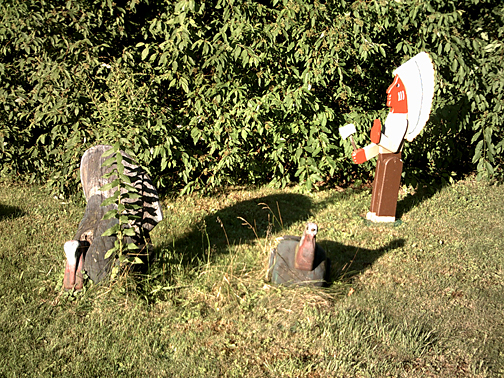 Yesterday I went out to the old house again for what I can honestly say was the next-to-last time. I wanted the rest of the ornamental rocks and I wanted the giant children's blocks in the little barn. No, I don't have the keys anymore (and anyway they have changed the padlocks). But I lived in that place for more than thirty-five years, I know its idiosyncrasies, if I want to get in, I can.

It took some of the sting out of the drive to take a different route. I needed to swing by my lawyer's house to pick up a sign that my mother had painted many years ago. I hadn't been able to fit it into my car on the last day.

This was a nice drive that ends along the south edge of C____ Lake. Pulling into her driveway I passed a sign reading WHAT PART OF NO TRESPASSING DO YOU NOT UNDERSTAND? and the near-lifesize plywood cow that I had given J___ earlier. I found my sign standing outside of her garage. She wasn't at home. When I looked into her garden I got a rude surprise: there on the end of a metal pipe was my mother's large copper rooster, the rooster that had been her shop's trademark and was a feature in our front yard for many years.

This just didn't seem right. She must have bought it at the auction, because I certainly didn't give it to her. It's one thing to part with some of Mom's treasures and know that I'll never see them again; it's quite another thing to have a special one re-appear in a completely new context. Well, it was J___'s right to buy anything she wanted at the auction, of course, and I knew that she had bought several pieces. But this felt like a little bit of a slap in the face. I stood and looked at it longer than I needed to or should have. Then, metaphorically at any rate, I shrugged and got into my car. It's not something that can be helped.

I had another shock when I reached the old house. The nice copper mailbox that I was thinking, at the suggestion of my friend L____, of swapping out with the black one that my mechanical man is holding, had been completely destroyed.

This must have taken some doing. Even the very strong, swinging iron "arm" that the mailbox had been mounted on was mangled. This thing has withstood years of being battered and hit multiple times every winter by the town snowplow, so I don't believe it was that. Either it had been worked over by someone with a lot of determination, spite and elbow grease, or someone had crashed a vehicle into it.

I would have been crushed to see this if I were still living out there. Even so, it made me sad. But once again, it was something about which there was nothing I could do.

The yard seems quite strange without any quats in it.

I loaded up the rocks. This was not an easy job. When I took two of them the last time I was out there, I hadn't imagined how much I would like seeing them at the end of my walkway here at the new house. Technically, they belong to the new owners. Not any more.

I also took my garden hose. I'd been planning on leaving it for them, but . . . I changed my mind. As my friend BC has been known to say, "I bought it, I paid for it, it's mine."

Then I got into the barn. There were two old advertising umbrellas that I had forgotten about, but needed for the yard. There were some small things, a set of Donald Duck bowling pins, a children's book, that I decided not to leave behind. I filled a couple of the giant blocks with these, and loaded them into the car. I could only fit three of the blocks inside, they were so huge. So, two remain behind. I'll get them when I pick up the jailhouse.

Back home once again. I off-loaded everything, set the rocks out along the front sidewalk, made a run to the supermarket. It was such a nice day that my neighbors had pulled out their lawn furniture, and instead of working some more in the house I decided to do the same.

I made good on my promise to the wooden deer and fixed his antlers. Then I carried him around to the front of the house. The Panda Bear, The Turkeys, The Indian, The Concrete Dog and his Doghouse, the Gas-Cannister Pig, a large ornamental pot, the second concrete bird bath, the Boinger, trellises, the Chickens, a wooden Blue Jay, the Crocodile, all came out of the garage and took up places in their new home. The Indian needed his headdress remounted and the male turkey needed to have his head glued on, so I did that. I brought out the metal table and chairs and carried them up onto the deck. I had opened most of the downstairs windows, so the quats sat there watching me whenever I came around with something new.

By the time I got done with all of this I was so pooped that I wasn't good for much more than flopping onto the porch couch. I put my feet up on The Thurber Carnival. Patches, Honey and Pooky all came to join me.

Today hasn't been nearly so productive. I've been on edge, fussing with little things.

ADDENDUM: Accent on the DUM. I left out the best part of the story! As I was collapsed on the porch trying to gather up enough energy to, say, stand up, a couple of kids came walking down the street. They were probably between the ages of ten and twelve. As they passed my front yard, one of them jumped up onto the rocks and skipped from one to the other all the way to the end. I thought, "Yesss!!!" That's exactly what they're for! That's exactly what I used to do when I was their age! I'm glad I went to the trouble of carting them over to a place where they will see their proper use.

Also, I finished in the Halloween Room this afternoon. It looks great if I do say so myself. And I do. Now there's just  just the Studio and the Laundry Room remaining with piles of boxes. Oh, and the upstairs hall. Still, things are coming along.
Posted by Freder at 2:25 PM