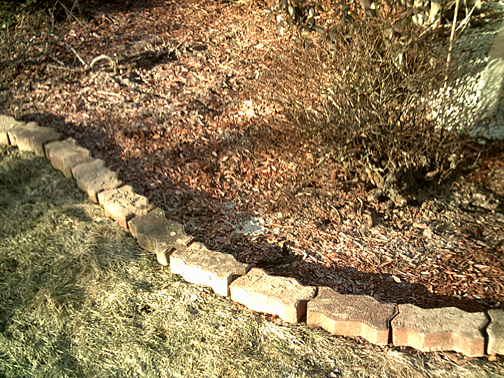 Another really good and productive weekend. I got so much accomplished! Not that there isn't a lot left to do before I can say the house is Ready for Prime Time, or even that there won't be some tweaking to be done when it is, but the All-New, All-Different Duckhaus is really starting to come together.

I'm finding that it's kind of a Zen thing; you solve some problems and other problems solve themselves. As you unpack, things come to light that you know exactly what to do with, other things come to light that you don't have a clue how you're going to use, and then you have days like the one I had yesterday -- the coin drops on a number of fronts and things begin to snap into focus.

Case in point: my laundry room. I hadn't planned to work in there this weekend, it just sort of happened. On Sunday I needed to be at the estate lawyer's office by 3:30, and I wanted to leave earlier to check out the local Agway for landscaping bricks (which they didn't have). I didn't want to get involved in anything where I might lose track of time. So instead of working in the Studio, I decided to hang a curtain in the laundry room.

This was made necessary by the ugliness of the wall against which the washer and dryer are standing. Plugs, the drain pipe, a thermostat, coils of ducting, and a gaping hole in the wall that used to be a vent for something but has no purpose at all anymore.

Well, it was a fiddly, fussy job, but I got 'er done. That was two things off the floor. I moved a bag and spotted a rolled-up poster. This was for the release of the Disney Co.'s Three Musketeers, starring Mickey, Donald and Goofy, given to me by an old friend, and it's poster sized for a mall window, so huge that I never had a place to hang it in the old house. I'd never even thought of using it here, but there I was staring at a huge blank wall and the lightbulb went on.

In order to hang it, I had to move two boxes and a trunk, and that meant looking at the contents. I realized that I knew where all the contents were going (wouldn't have been able to do that even a couple of weeks ago) and that they would be easily unpackable.

Couldn't do it just then, but when I got back from my errands I started in. Three empty boxes and two empty trunks later, with the carousel horse sitting on one of the trunks and a funky lamp installed on top of the apothecary chest, and suddenly I had a real room on my hands. A dirty real room, but a room that a person could conceivably spend time in.

As a result of my efforts over the whole weekend, three rooms are significantly closer to being done. I put one of my mother's lamps out on the porch, and kept it open well into the evening hours; Honey loves it and it's going to be a great place for relaxin' and romancin' -- the latter assuming that one of these Earthquakes tips the world far enough off its axis to throw a woman into my lap!


*
Anxiety is still a factor in my life, especially on gray mornings like what we've been having lately. It doesn't seem to be focussed on anything in particular: I am an Equal-Opportunity Dread-er. The biggest factor really does seem to be the Sun, or lack of it. My moods and emotions are definitely impacted by whether or not Mr. Sun chooses to make an appearance, and it's getting more pronounced as I get older. The best remedy is simply to keep an eye on the windows, and when the sun does some out, to get out there and catch some rays, even if it's just for five minutes.

Are human beings nothing more than Portable Solar Panels? Some days it feels like it!

Email ThisBlogThis!Share to TwitterShare to FacebookShare to Pinterest
Labels: anxiety, starting over