The Internet May Indeed Be a Playground. . . 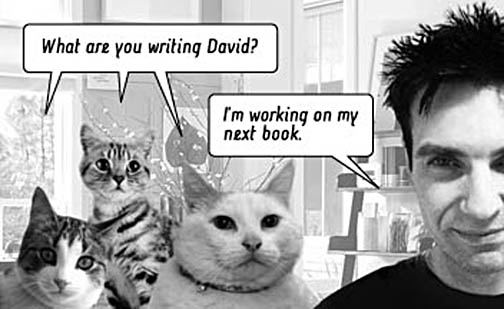 . . . but David Thorne's book with that approximate title is more like the paperback equivalent of trowelware. This is why the world needs editors, and why the world is a little bit worse off without them.

I'm one of those people who found Thorne's website (which I will not name or link to here, because I'm afraid that Mr. Thorne would follow the link back with dire consequences to myself) really hysterically, laugh-out-loud funny. But the book, which contains a complete archive of the site plus, seemingly, everything else Mr. Thorne has ever written, is a classic case of not knowing when to stop.

I can hear the publisher thinking "We have to give them a reason to buy the book. We have to give them lots and lots of stuff that they can't get for free right on Thorne's website. Let's jam-pack the thing with everything David has ever written, even if it's just a laundry list!"

This is like a dump truck being emptied onto your front lawn.

To be fair, I was ill yesterday and I turned to the book for cheer. Instead, I grew increasingly depressed as I realized that this was the same thing over and over and over again, and that I could predict pretty much exactly how each piece would go. "He's going to go into a deliberately ridiculous digression with a story from his youth now," and yep, there it was, right on cue. I began skipping over whole sections, in search of the good stuff, and finally I just had to stop about a third of the way short of finishing the thing. I'd had more than enough.

Thank goodness I didn't pay money for my copy -- it was an Advance Reader's Edition that I got through the bookstore. In the end, I didn't even want the thing in my house. I brought it back this morning and put it on the shelf with the other Advance copies. Let someone else enjoy it, if they can.

By all means go to Mr. Thorne's website and enjoy the mischief there. The internet is the perfect vehicle for him. If the book brings him some income, then good on him. But I can't recommend it to anyone who isn't, almost literally, a glutton for punishment.