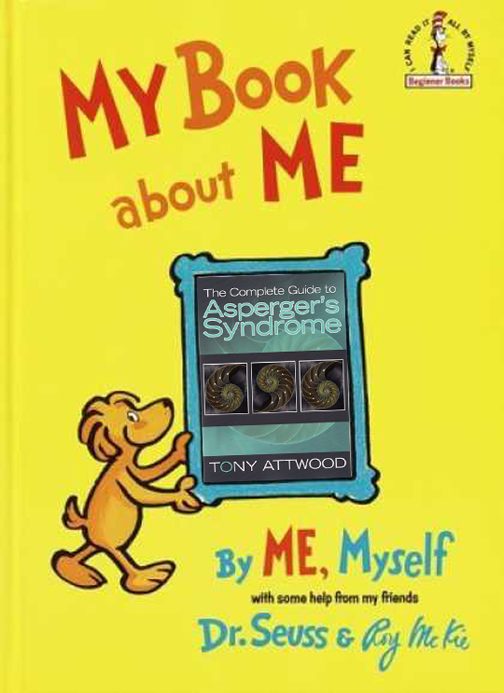 I had ideas for this weekend, but the weather pattern and ten consecutive days on the job (including a horrific day of enforced social activity, see below) necessitated a change of plan. Besides that, I really wanted to finish reading The Complete Guide to Asperger's Syndrome. With a grisly, drizzly day to accommodate me, I parked myself on the porch and spent most of the day on that goal. From time to time I had Patches on the back of the sofa up by my head, and Whitey and Honey on my lap. It was chilly enough that I needed a blanket, and the quats liked the extra padding a lot.

I wish you could see my copy of the book. Every fourth of fifth page has a corner turned down, book darts adorn the edges, many, many passages are underlined or highlighted. Whatever doubts I had got smaller and smaller as the reading progressed, and now they are completely gone. Autism, no. Full-blown Asperger's, oh yes. And not a mild case.

If I fooled anyone, it's because I'm a good actor. I should have followed my own instincts and desires and pursued theater as a career. It's what I wanted. But I had no support from my parents, and lacked the courage and the social skills to proceed on my own. When it came to college, my parents' style was to say "If you need any help, just ask!" They should have known me well enough by then (and perhaps they did) to realize that this was the exact same thing as saying to me, "You're on your own."

And it's just like now with the car situation. When there are too many options before me and no clear answers, and every option comes with its own set of problems or modifiers, and I'm frustrated and don't know what to do, nothing gets done.

I am going to quote just one segment, because it speaks to how I've lived my entire life:


When the reaction to Asperger's syndrome is to achieve social success by acting, using a pre-determined script and a designated role, people with Asperger's syndrome may camouflage their social difficulties but not be true to their real selves or understand who they really are. Their personality is determined by the role they take in a particular situation and imitating those who are successful in a particular situation. An adult with Asperger's syndrome who is a retired professional actor, said to me that, "It was only in my adult years I developed my identity." During his childhood through to his young adult years, he did not know who he was, other than a repertoire of roles.

To  this day, the happiest time in my life was the year that I played the John Travolta part in Grease back in high school. This was before the movie came along and watered-down the material forever. The part stayed with me when I was away from the stage. I became more confident, even popular. I became a different person.

But you can't hide in a romantic relationship, and my girlfriends, if they didn't know the cause any more than I did, certainly all figured out that a relationship with me would be far more challenging than anything they were willing to put up with. The longest I ever lasted with any of them was a year. Now I've given up trying. It seems the better part of valor. Or, as W. C. Fields so wisely put it: "If at first you don't succeed, try, try again. Then quit. No sense being a damn fool about it."

If anything, my behaviours and signs have grown more pronounced (aiding the self-diagnosis but making daily life that much more distressing) since I stopped drinking like the proverbial fish. I was masking an awful lot of anxiety, hypersensitivity and social unease with alcohol, not to mention depression, which I see now is not the source of my troubles, but merely a symptom, and not even the most profound symptom at that. With the alcohol taken out of the picture, the behaviours came roaring back, stronger than ever.

Now that the shock is behind me and I have some knowledge about what it is that ails me, I'm much more relaxed about it. It can't be changed. All I can do is continue, knowing what I now know.

Well, I started this post going in one direction and ended up going in another. That's me all over.