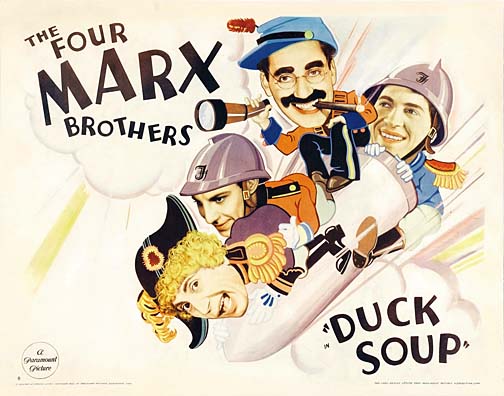 At the height of the Bad Stuff that was going down both publicly and privately surrounding the anniversary of my mother's death, my friend Donna G___________, known to some of you as a frequent commenter here on this blog, made a beautiful gesture and sent me a copy of Roy Blount Jr.'s latest book, Hail, Hail Euphoria!: Presenting The Marx Brothers in DUCK SOUP, The Greatest War Movie Ever Made.

I never saw the box that it arrived in (so Donna, if there was a return address, I never got it). I came in to work one morning, and Stephen, a student worker, had just opened it. There was a general level of mystification, as there always is among the receiving crew when something arrives that has no discernible paper trail. Stephen handed the book to me, and I noticed there was a card, which I opened. "Oh!" I muttered in surprise. "It's from a friend." And then I beat a hasty retreat out of there so that they would not see my tears.

The D__ sisters and I (the initial can stand for their first names or their maiden names, you take your pick) go way back. But it's not what you think, although a part of me wishes that it were. Donna's sister D____ wrote in my senior class yearbook, "I'll let you know. I love you." Should have been a clue, right? But hey, I had Asperger's and didn't know it, it wasn't even a real diagnosis yet; anyway, I didn't have a clue and wouldn't have known where to start. Dating in High School? For me, beyond the pale. The closest I came to having a girlfriend in High School was a girl named Deanna who had sat in front of me in home room for four years without ever saying a word to me or even, to my knowledge, looking at me, suddenly wanted to hold my hand in the hall between classes. I liked her -- but I didn't understand any of it. My efforts to understand included talking to classmates -- and that was the end of that.

When I played the John Travolta part in Grease and it became very much a grafted-on part of my make-up, that was the first time I really started to have any kind of a real social life. The whole company went out together -- to MacDonald's, where we were in full character and were very nearly arrested; to the Hukilau, where, cash-poor, I drank water while the others feasted on Chinese; to the famous Cape Elizabeth Lobster Shack, where, in full Danny Zuko mode, somehow it came about that I had to kiss every girl in the place, and the third D__ sister, D___, was the only one who demurred. I thought she hated me.

The book is neat, and I knew after the first few pages that I had to get my hands on a watchable copy of the movie, which, believe it or leave it, I didn't have. That was OK. I needed to read my books about Asperger's first anyway.

The main title of the book is based on a pun made by Gummo at the Algonquin Round Table, wrapped around the word "euphoria." I'll let you work it out for yourself. It's the last line in Blount's book, so I'd hate to five it away. Clue: although there are five Marx Bothers, only four of them are in Duck Soup.

The book is a self-proclaimed DVD Commentary track, but on paper. It's good fun to read, and full of good information. Like, did you know that the director of Duck Soup, Leo McCarey, a flawed great who worked with the best of them including Laurel & Hardy and Charley Chase, so deeply DEEPLY did not want to work with the Marx Brothers that he actually left the studio? Only to find himself, through a circle of events worthy of Duck Soup itself, having to work with them anyway.

Well, I mean, think about it. You're a movie director. Would you want to work with the Marx Brothers?

Quoth McCarey, "They were madmen!"

Blount has done his research, but he still makes one glaring (to me) mistake. Of course Woody Allen's Hannah and her Sisters must come into the narrative, because Woody's character in that picture is actually saved from suicide by watching this movie (a fact which Blount finds extraordinary, but which I understand completely. Feeling suicidal? Put on Duck Soup and you will know that you have to stay). Anyway. Blount refers to the Woody Allen character in Hannah as "Alvy Singer," and that's just wrong. Alvy Singer is Annie Hall. Sorry Roy.

But that's a nothing, really. That's just me showing off -- Ha ha! I've got something on the expert!! Blount's book is full of Good Stuff, and a delight to read in conjunction with a viewing (or multiple viewings: Duck Soup really is a picture that demands repeated exposure) and I can't do either the book or the movie justice in just one blog post.

On the whole, I find actual DVD commentaries to be distracting and annoying. I can only do one thing at a time: listen to a discussion about a work of art, or experience the work of art itself. This is absolutely perfect, and I wish that more DVD commentaries came in book form.

Duck Soup may not actually be my favorite Marx Bothers movie -- but I'm working backwards through time, so I won't make the call as yet. The thing is, Chico doesn't get to play the piano and Harpo doesn't get to play the harp, and I can't regard a Marx Bothers movie as being complete without at least a glimpse of the soulful Harpo, the spiritual Harpo, the Romantic Harpo -- that side of my favorite of the Brothers that actually made his character complete. Harpo was in no way "on the spectrum" -- all of the Bros. Marx were perhaps more neurotypical than your average neurotypical -- but he played someone who was. . .

Thank you Donna! I have to stop typing now, but I'll have more to say in the time ahead. . .