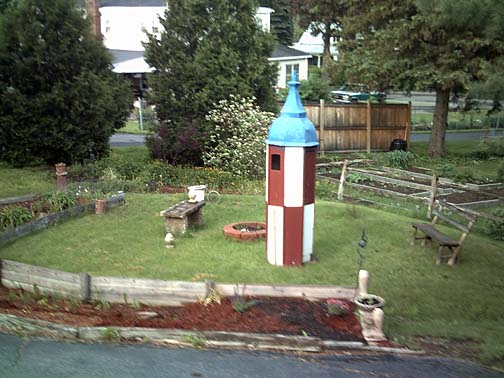 It's here! The jailhouse! There it is in its new home in my "formal" garden. The last piece in the moving puzzle. The final proof that home is here.

What is this thing? you may be asking. I'll tell you.

It is, literally, a drunk tank, dating back to around the turn of the last century. When a cop on the beat found some gent who was drunk and disorderly, he'd lock them in one of these things, where the person would literally chill until the paddy wagon came around to take him to jail.

That's its history. But to me, today, it looks and feels like my TARDIS.

My father had been very interested in using his truck to move the thing here. I had my doubts: he's getting on in years and has a bad back. But he insisted. Late last week, I asked if he would be available sometime over the long weekend with the provision that if it proved too much for the two of us that we STOPPED and I called in the movers.

Somehow, somewhere along the way, the plan got changed, and I didn't have much say in it. Instead of us going over together on Sunday or Monday, Dad and his wife wanted to go out there on Tuesday -- alone.

How do these things happen?

Well, thank goodness that as it turned out they had plenty of help. The new owner and his father were there, and they were anxious to get rid of the thing, and they did most of the work of loading it into my father's truck.

When I got home from work Tuesday afternoon, there was my father's truck with a hoosegow strapped down in back!

My backyard neighbor, R____, the one that I like, came out and climbed into my yard to see what the hell was going on. She was nice about it, a real sport, because she and her Significant Other will have this in full view of their back garden, and I can well imagine a lot of folks wouldn't appreciate that. Dad being the self-proclaimed raconteur that he fancies himself, he gave her the whole history of the thing.

She climbed up onto the truck and helped us unload it. We shored it up with a bit of stone paving from the garden and two stakes from the garage.

She actually laughed when I made my TARDIS comment. Sometimes I wish people wouldn't do things to make me like them.

As I was coming back from putting away the remaining stakes and the sledge hammer, I saw Dad talking to R____ seriously. I don't know what he was telling her, but she looked concerned and sad. The conversation broke up as I came down to them. I hate it when that happens.

R____ and my Dad's wife suddenly really started to hit it off. They're both gardeners -- and both outgoing. M_ went down into my neighbor's garden and she showed her the whole set-up.

Dad and his wife came in and cleaned up a bit, and then we toddled off to dinner at Ruby Tuesdays. They had a coupon. I used to take Mom there for lunch every so often on a Saturday. I'd forgotten that the first thing you have to do with one of their hamburgers is cut it in half.

On Monday afternoon I was doing what I could to recover from what felt like a minor case of heat stroke, picked up that AM working in the garden under the suddenly hot sun, when my friends from college, who live just down the block, showed up on my doorstep to invite me to dinner. This didn't sit so well with me, because it was unexpected and a disruption of my Routine, but I accepted because -- well, that's what I have to do to break out of myself, I guess.

When the time came to leave I threw the deadbolt on the back door and went out the front way. It turned out that Pandy Bear had been hiding on the front porch, so I had to get him back into the house somehow. I have no keys to any of the front doors. I went out the front, walked around to the back, tried to use my key to get in --

-- except that I had thrown the deadbolt.

After that experience, a little bit of socializing was relatively easy.

But I must say -- as much as I sometimes get lonely and crave social contact, after two straight nights of it under these conditions I was glad to have things back to peace and normalcy tonight!

Gonna take out the trash (so I don't have to do it tomorrow morning) and scoot quickly around the block. G'nite!