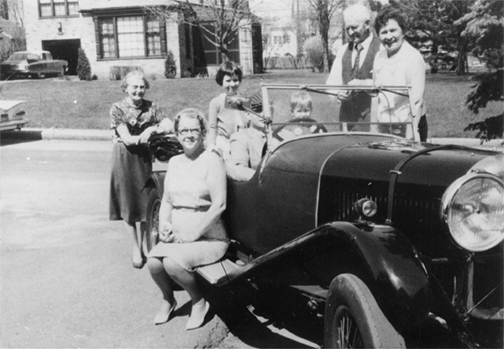 Old photographs can be haunting even when you don't know anyone in the picture. Change is the murderer of all things. When you do know the people in the photograph, you can be left feeling powerless and sad. I look at the picture above and think, my god, was the world ever really like that?

There are only three people in that picture who are still alive: My sister the wolf, my father, and me. It's funny that we three are sitting together while everyone else outside of the car is waiting to be swept away by Time and Motion.

My grandmother Agnes, far left, was the first to go. This picture was taken before she suffered a stroke while weeding her garden on a sweltering hot day. It didn't kill her: it robbed her of herself and her memory. She became first a wordless, frustrated child, and then, slowly a vegetable confined to bed. She died of choking while my Aunt was feeding her.

And the auto moves on.

Next was her husband, my grandfather Adolf, the first alcoholic in the family, standing on the runner board to my right. He was coming out of an antiques show when he was struck by a car driven by a young idiot with a girl in his lap. He was hit so hard that his body was thrown clear across the street. Grandpa had a hard life, had a lot to cope with, including the loss of most of his tongue to cancer. He was a very matter-of-fact guy. I didn't know about most of his troubles.

So my father was the first one of my parents to become an orphan, while I was still quite young. The auto had a chance to speed forward some few years before the next one dropped away, the man holding the camera, my grandfather Claude. He died at home, in my grandmother Melvina's arms, I believe of an aneurysm.

Grandma (sitting on the running board) went steadily downhill after that. She was already frail. I don't think that she ever forgave Grandpa Claude for dying first. My mother and her brother got her into an assisted living facility, a better place than many I've seen. I was there to help move her from her house into her new apartment. She tried to get along, but I could see she was bitter. I came back home to Maine and never saw her again. On her deathbed she told my mother, "Is this really all there is? What's the point?" and early last year Mom said she was starting to feel the same way about life.

The car didn't last long. Dad loved old cars, but he kept switching them out. The one I remember was a big black enclosed car the size of a small house.

The picture was taken at our house on Edgcombe Road. Even though I was very little, I have many memories of my life there that I can "see" as clearly as when they happened. My father didn't believe me, but I was able to describe the house to him in detail. Sometimes my memory is so vivid that I feel like I'm looking into an alternate universe. Can see into it, but can't go there. The black automobile carried the three of us away from all that. It is far, far in the distance.

Sometimes I don't think I understand the world or the way it works any better than I did when I was that little kid behind the wheel.