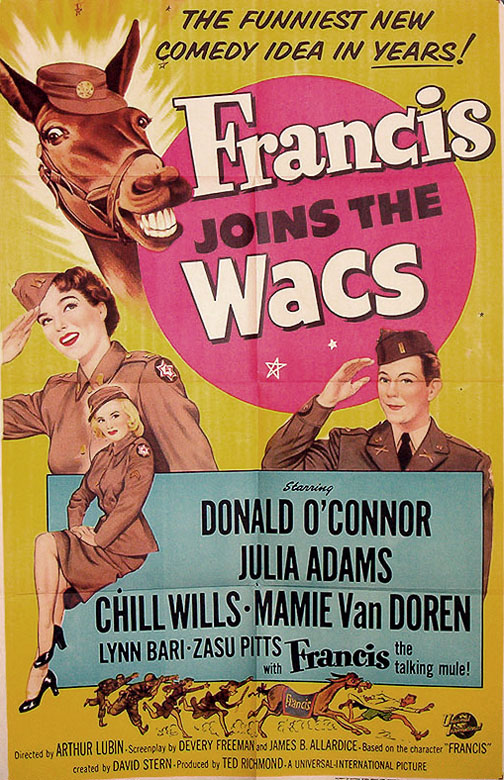 I actually have an original copy of this poster hanging in my living room. I figured, if I have a poster for Francis in my living room, I should have at least some Francis on DVD. Anyway, I haven't seen a Francis movie since I was a very little kid, growing up in a time when local stations had lots of time to fill and often filled it with packages of old movies. *Sigh* It was a great time to grow up in.

Francis Joins the WACS is unfortunately a later movie in the series that didn't make it onto Universal's Francis the Talking Mule, Volume One DVD release -- and there hasn't been a volume two. Well, the price was right, and I had a hankering to revisit something from my very distant past, and I figured I'd be doing my part to encourage an eventual release of Volume Two.

It's been sitting here waiting for my attention for a couple of months, and last night I finally cracked open the one that started it all. Although it's popularly known as Francis the Talking Mule, the actual onscreen title is simply Francis, so that's how I'll refer to it from here on.

I don't think I've actually ever seen this one before. I don't remember Francis as having a military connection right from the beginning. But there it is: Donald O'Connor is a hapless Second Lieutenant version of Elwood P. Dowd, but this being wartime there's little room for subtlety. Talking animals always seem to take a fancy to the disingenuous type, the ones who won't be believed when they try to explain what's happening to them (although, alas, never to me. I could use a sensible, Animal Sprit advisor). Francis comes close to the delirious whimsy of Harvey, but falls short the minute it becomes clear that Francis must indeed "come out" to the authorities, and, indeed, the whole U.S. government, if this thing is possibly going to have a happy ending.

I suspect this didn't play as well in the cities as it did in the sticks -- but I have to confess that I enjoyed it completely. How old was O'Connor when he made this? He looks like a baby. But the guy is so naturally talented and funny that he holds down this nutty fruitcake of a movie just as if he was a Seasoned Pro. Such confidence in every movement of his eyes. The only person I can reasonably compare him to is Ray Bolger -- another hoofer who knew how to sell an act.

Without computers to whip up a Wholly Artificial Mule, Universal's effects crew use some very basic techniques to get Chill Wills appear to speak through the long-eared title character -- and y'know what? It's not only perfectly satisfactory, but it registers on my brain as being notably more genuine than a modern bits and bytes version of the character would be. At least you know that you're looking something real.

All the supporting cast is worth watching, especially the delightful Zazu Pitts as a mental-ward nurse who takes a more than possessive attitude towards O'Conner when he keeps being returned into her care. This was back in the day when we had Character Actors -- and what a loss it is to the movie industry that this type of player is no longer cultivated or cherished.

It's not, you know, The Maltese Falcon or High Sierra or even Duck Soup -- but it would be wrong to expect that. This was also back in the day when we had movies that wanted nothing more than to charm and entertain. Now, with access to a hundred gazillian channels, I can safely say that this is another thing Hollywood has forgotten how to do. Francis is the professional product of a machine that confidently knew how to make a perfect cupcake from scratch using real ingredients. When they try to do this now, the result is inevitably a Twinkie.