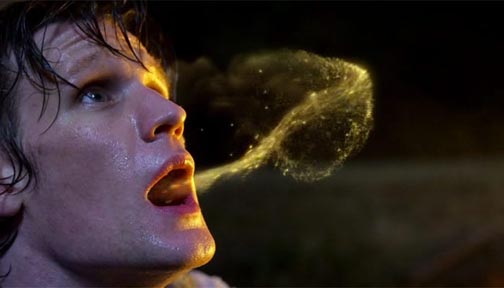 A friend on Facebook left me a message asking me to post EXACTLY how I am (capitalization his). Well, that's exactly the thing: exactitude is not exactly a strong point of mine in the best of times. As exactly as I can express it, this is exactly how I am: I am somewhat like The Doctor.

I'm an eccentric non-neurotypicical who has just been through an explosive, year-long regeneration, and I'm not done yet. "Still cooking." Unfinished. I have good moments and bad ones, and the good can change to the bad in the blink of an eye.

Been away from the computer for nearly the whole week-end. Sunday last I had my father and his wife over again for what I thought was a very successful Father's Day. It came off well enough that I felt up to managing company again this weekend. D_____, a friend that I haven't seen in, what, a decade or more? came by in the afternoon. It was fantastic to see her again, I'd nearly forgotten why she was one of my favorite people from the old bookstore days. She could only stay about forty-five minutes, but even so it was a bit like no time had passed at all.

Then around six, S_____ and C____ came over to dinner. I'm afraid this was a bit more like a visit to a local museum for them than it was a relaxed social outing! I forget that although the house is, for me, uncluttered and open, to others I think it must be a bit like the stepping into a TARDIS.

Yesterday I spent almost the whole, entire day reading. I cannot tell you when was the last time I did that. No, really, I can't tell you, because I don't remember, it was so long ago. Used to do it all the time. I took an hour or two at three o'clock to mow the lawn and clean up after -- the rest of the day I was out on the porch sofa, stretched out with a varying array of quats sitting on or around me (at one point I had all five on the sofa with me!), nose buried in a book. Nothing high-toned, mind you. But I was determined to finish Miss Peregrine's Home for Peculiar Children just on principle, just so that I could say that I'd finished something.

It's a bit derivative -- X-Men wrapped in a fairy-tale setting, and pocketed with isolated lapses in taste and careless writing, but on the whole it's an entertaining diversion with its own flavour. At least it's not another Harry Potter knockoff, although it does revolve around the old saw of a so-called normal kid discovering that he has a special ability.

Of course it ends, not so much in a cliffhanger, but in a clear set-up for another book to follow. I enjoyed reading this one, but not so much that I need to pursue any further installments in the series.

I wish that I had a special ability, I mean other than making friends with animals (which is also my Indian name: "Makes Friends With Animals.").

During my dinner break I watched a vintage Doctor Who show with William Hartnell, and then I went right back onto the porch, where I started in on something even lighter-weight: David Thorne's The Internet is a Playground. I still haven't decided for certain if his stuff is for real, or if he's made it all up. It's a lot funnier if it's real.

And just before bed I returned to a favorite, King Aroo. Have I burbled about King Aroo on this blog? Do yourself a favor and follow that link. Then follow this one. I don't care where you buy it or even if you buy it -- get it from the library if you prefer; after all, it's pricey; but King Aroo really is the greatest thing since sliced bread. Nothing makes me smile inside like King Aroo. I'm so glad that I decided to nibble a few pages before sleep.

Other than mowing the lawn (and I wonder what my neighbor thought about that after I'd already done the side facing them early on Wednesday morning, just after midnight!) I did nothing more productive. I've decided not to beat myself up about not working on the new website as I should be doing. After all, I'm still cooking, and I've decided that's all right. When it's ready to happen, it will happen.

Email ThisBlogThis!Share to TwitterShare to FacebookShare to Pinterest
Labels: books, comics, Doctor Who, starting over