An Open Letter from a Derelict Corespondent 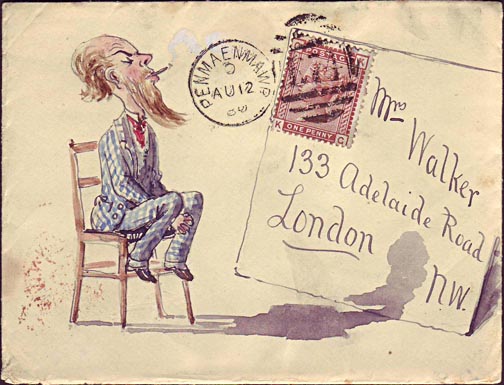 This is going out to everyone I owe correspondence to in one form or another. The list is getting fairly long.

Don't think that it's personal; I haven't been getting back to anyone lately. So that makes me an Equal Opportunity Procrastinator.

The only issue is me. I seem to be in full Greta Garbo mode, crawling into my hobbit-hole and pulling it in after me. I haven't even paid my mid-month bills yet because I don't want to think about it.

The anniversary was hard, and two ten-day work weeks out of the past three didn't help. Also, I think there's a bit of a let-down now that the move is over. Right now, it's taking everything I have just to get through a normal work day. Oh, there's a quote I'm dying to insert here, but I'm trying to quit that. Let's just say that my steampunk difference engine is chugging away full bore, but my coal supply is low.

I've established a workday / weekday routine that's working fine, but the weekends and off days are another thing. I actually haven't had enough off days to figure out a routine. It's got to involve chores in and around the house, but I also have to mandate specific time for reading and for doing something in the creative realm. If I don't specifically schedule those things, they won't happen. Yet there has to be some flexibility in there as well -- not something I'm good at. I feel like a normal person wouldn't have to work so hard to manage their free time.

I also feel like a normal person would be all settled in by now and be ready to take on social activities such as entertaining friends. I worry that C___ and S____ are going to be angry at me because I've had dinner at their place twice already, and I haven't reciprocated yet. But, see above, I'm still feeling very much un-settled and un-ready. Until I know what life is going to be like, I don't want any more distractions than I already have.

That's it, really. Back to the seed metaphor. The prep work has been done, but I'm still waiting for a shoot to break the surface. It's taking longer than your average flowering shrub ought to. But then, it's been a cold spring, and I haven't been allowed much in the way of free time in which to germinate.

I'm ready for that week off, now. I've got a leaky valve in the basement that needs attention from a professional (ah, no, that one is NOT a metaphor!), and there's still the fan in the gas fireplace that needs replacement. But my boss scares me.

Oh, here's an amusing little story against myself: the other night I wanted to cook a pizza (I make it myself, piling it deep with hamburger, mushrooms, broccoli and bacon), and couldn't understand why the oven was taking so long to heat up. My pizza was ready to go and the oven was still only at two-fifty. Well, I'd cooked chicken the night before, and instead of washing the pans I filled them with water and put them back in the oven to soak overnight. Then, of course, I'd promptly forgotten they were there. By the time I opened the oven to see what was taking so long, the pans full of water were steaming hot. I spilled a bit of the chickeny water inside the oven taking them out, and steam boiled out.

The next thing I knew, the damn smoke alarm was sounding off, and surprise! It wasn't the one in my head. Doing more than one thing at a time is not one of my strong points under the best of circumstances, and I was getting pretty rattled. I climbed up on a chair and tried to turn the alarm off, but the bloody thing would not stop. I finally ripped the cover off and yanked the battery out of its socket. By then I was cursing loud enough for the neighbors to hear, I'm sure. What kind of a moron puts a smoke alarm right outside a kitchen where smoke happens all the time?

I no more than got back to the stove when the smoke alarm in the laundry room decided to shout at me, too.

Gah! I gave it the same treatment. And guess what? I'm not putting the batteries back in!

Dinner was quite late that night.