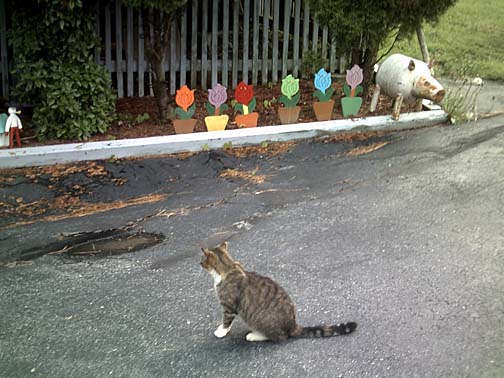 This may be more than a little bit disjointed tonight. Maybe it'll coalesce into something. Maybe not.

I did not entirely want to stay in the old house, but still and all I wouldn't have moved from there if I hadn't been so forcefully pushed. It's a personality characteristic that I hate being pushed out of my routine, but looking back on it from here, as difficult as it was, I think leaving was the thing that needed to be done.

The anniversary was hard enough to get through here in my new world. Had I to endure it in the old house, in a place that was only a ghost of my home, with her gaping, empty room to walk into every day, it might have been unendurable.

This does not mean that I let my sister off the hook for her crimes. But I feel a lot like how I imagine Tiger Whitestockings does in the photo above, still taking in her New Surroundings: "Huh. Look at that. It's Interesting. It's Nice. It's my Home now. But it's still so new. I hate new."

I see now with a lot more objectivity what a very bad place I was in a year ago today. A dangerous place, within touching distance of death by alcohol. In some ways it got a little bit better after my horrible experiences in the hospital, but my emotions did not begin to truly heal until after the move reached the stage where I didn't have to go back out to the old place every damn day and sometimes twice or thrice on the weekend. Now that it's truly done, with the "cooler" installed here, now that I know for certain that I will never see the old house again, that page not just fully turned but ripped out of the book forever, a strange mood just exactly like what a writer or cartoonist feels when staring at a blank piece of paper is full on me.

At the same time, there's my creative self wondering if I can still hack it. A part of me wants to get back to writing and drawing, but I guess that I'm still in transition: I want to get to work, but a deeper part of me dreads it and fears that I may be washed up. Anxiety being the anathema to doing creative work, I know what has to happen. The desire to work is not enough. The fear of failure needs to be stepped over like a crack in the sidewalk. Step on that crack and the bears will get you. My foot is metaphorically raised and extended over a very deep and wide crack that, when I look into it, as I cannot seem to avoid doing, seems insurmountable.

Today at work, I received my performance review for the year. It was perhaps made better by the fact that in my self-assesment prior to the event, I did not hesitate to tell the truth that this has been less than a stellar year on the job. I gave reasons, and offered specific examples, but did not make excuses. Was I just being honest? Or did I manipulate this scenario perfectly?

In any case, my boss was uncharacteristically generous in her comments, Much more so than in prior years when I actually deserved more generosity than was forthcoming.

It's Reunion time at the college. One  of my biggest weekends of the year. In this time I will work another eleven days straight in a row, without a day off. For me, this is a little bit like Sleep Deprivation, even though I won't really be missing much (if any) sleep. Time Alone, Quiet Time, Solitude -- whatever you call it, that's sleep for me. I know that I'll get through this all right because I'm in a better place now than I have been in well over a year. It's just One More Milepost that will be smaller in my rearview window than it appears now.

Today, an elderly alum who seemed desperately confused and sad looked me in the eye and said, "Have you seen my wife?"

It was the kind of question that makes every potential response into a lie.

How could I possibly know if I had seen his wife?

"Maybe" would have been too ambiguous a response. "Yes" could well have been the truth, but how could I answer the inevitable question that followed?