Neighbors is the bunk 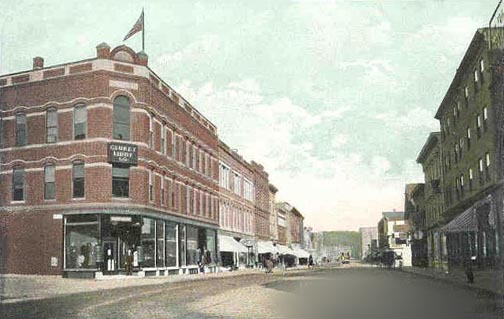 When I told C______ at work today that I was wakened this morning at seven AM by my neighbor mowing her lawn under my bedroom window, she laughed and said, "You're not used to living in the city!"

But I don't think that's the problem.

This tank town does indeed call itself a "city," but I say it has delusions of grandeur. The postcard above was taken sometime near the beginning of the last century, and Main Street has barely changed since then. This isn't a city, it's a blot on the landscape.

And I'm finding its people to be sickeningly provincial. It's barely an exaggeration to say that they roll up the sidewalks at five o'clock. At nine PM I can walk around two blocks in my neighborhood and never see a car and most of the lights in the houses are off, but at seven AM on a Saturday morning everyone is out there driving around, who knows where they'd be headed at that time of the bloody morning.

This is not "city" life as I know it. I have spent some time in cities, including New York, Boston, San Francisco, London, Edinburgh and Glasgow, and city people do not behave like this. Real cities are alive all night and quiet on a Saturday morning. This is the way a Sane and Civilized Universe works. W_______, you are populated by hicks!

I'm not sure what action I'll take, but Action Will Be Taken. I've watched too many Bugs Bunny cartoons to let this go. The Elmer Fudds who live next door to me are going to get a taste of their own medicine.

But I don't want to punish the whole neighborhood (or get them all mad at me for that matter). The next time I'm wakened by my neighbor's lawnmower, I could douse her with a bucket of cold water. That might do the trick.

Mustn't be too hasty. The punishment has got to be subtle, and fit the crime. Time to get out the books on Dirty Tricks and do a little research. . .

I'm reminded of a Warner Brothers cartoon where Daffy and Porky are trapped in a hotel room by the manager. They try everything to escape, then in desperation Daffy says: "I know! Let'th call Bugth Bunny! He alwayth knowth what to do!" The call is made, and soon the familiar voice is on the other end of the line. "Did'ja swing across on de rope?" "Yeth!" "Didja try. . ." "Yeth! Yeth! Yeth! We tried all of thoth thingth!"

Cut to Bugs. He's in a similar hotel room, shackled to the wall. "Ehhhhhhhh, don't woik, do they?"

End of cartoon. I can tell that mine is just beginning.