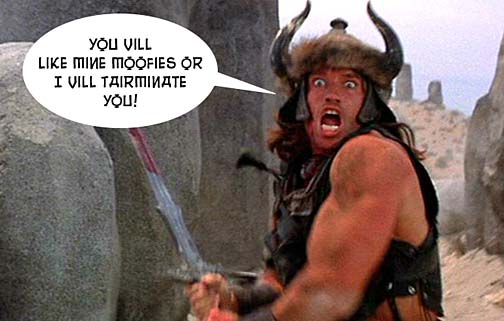 Ah! So tonight on TCM, see opportunity for humble Aspie blogger to catch up on Japanese Monster Movies not seen before today, though much read about. It is chance not to be passed up. Imagine sinking feeling descending on humble servant as evening progresses. Early scenes of all movies are well shot and dramatically sound. There is compelling relationship to catastrophic happenings both then and now to small island of good and honorable Japanese people.

Then, rubber monster suits begin trouncing matchbox cars and cities made of humble popsicle sticks! Unlike honorable mister Kong of Skull Island, monsters have no personality to save them from special effects for which perpetrators must surely have committed hari-kari! Scales on back of Gojirra actually wobble! Rubber wings of Rhodan remind honorable reviewer of something horrible to come from German sex-toy factory!

Much time spent on Wonton -- no, sorry, honorable excuses made here -- wanton destruction, no characters of interest to cling to anywhere! Horrible dubbing with the voice of honorable Paul Frees playing every other character and the voice of honorable Keye Luke (all very recognizable to humble Aspie movie fan) playing two-thirds of remaining characters. Movies start out Most Well, but rapidly descend into such deep mines of boredom that force humble reviewer into depths of sleepishness, from which he is forced to rouse himself, shake off sleep, to crawl to computer and type hopefully offensive lines about movies which never deserved all of the typing which they have received over humble years!

O! For a chance to cleanse the humble palette with the pureness of something genuinely good! But seven AM comes quite early upon the dawn, and time does not exist for humble Aspie reviewer to do anything but mock, snort, and retire to comfort of bed to dream away bad taste in mouth of films most distressingly overrated.