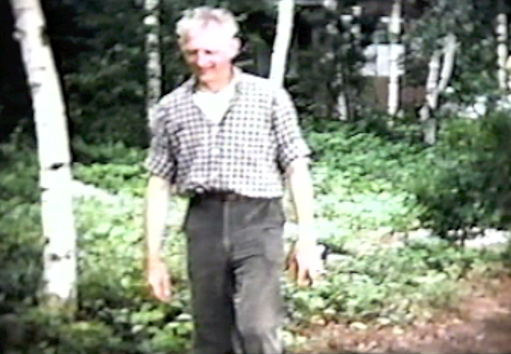 My Uncle Orland died yesterday. He was my father's older brother.

We weren't close. My father moved us to Maine in the mid-'60s, and the families, which had previously been very social (we summered together at Lake Vermillion, always did the holidays together, and had dinner often at each other's homes) went their separate ways. I saw my Uncle Orly only twice after I reached adulthood. The first time he took the fedora off of my head and rearranged the creases. The second time he called my car "an American piece of crap" (well, he was right) and told me, "This is what 84 looks like."

That bluntness was characteristic of Uncle Orly, but also of my father and of their father, Grandpa Adolph. Uncle Orly often said things that he shouldn't have said, especially to my father. Once, he took my father aside and told him off for being so critical of me. He said, "Don't you see what you just did? He was working really hard, and when you cut him down he completely deflated."

Once, he took me aside and complained about my father's hair. "He has beautiful snow-white hair, and he makes himself look ridiculous by washing it out with that Grecian formula stuff."

Remembering comments like that makes me wish that I had known Uncle Orly better. He was right about a lot of things, but being right doesn't always make it right to say it. There were sometimes Inappropriate Incursions.

Uncle Orly had white hair for as long as I knew him. He had piercing blue eyes and a strong voice. I used him as the physical model (though not a character model) for Mr. Sentack in my short story "Punch & Judy" (available elsewhere on this blog). He liked the outdoors and he liked racing cars, and he liked being the Alpha Dog.

I didn't have those words to describe him when I was a little boy, but I could sense it about him, and it's confirmed when I watch the footage of him in our family home movies. When he entered any room he was in command, but somehow in command from a distance.

There were stories from my father about their scouting days, about pranks played. One of the pranks involved the streetcars of St. Paul, although the details are lost to me. I'll have to ask my father. On another occasion, a Scouting trip (this was back when the Boy Scouts were really Boy Scouts, and much time was spent in the wild), the boys were investigating an abandoned house and Uncle Orly rigged up pranks to play on the others, to make them think the place was haunted. According to my father, Uncle Orly was deeply engrossed in this when he sensed a presence in the room, felt a hand on his shoulder, turned around to find himself alone. But that may have been a prank as well.

Uncle Orly was legendary for the Treasure Hunts he would sometimes set up for us kids, if he was cajoled in the right way. My sister and I had a taste of this when his family visited us in Maine, I think during our second summer. He started in the front yard and went deep into the woods out behind the house, leaving us clues of various kinds at every step of the way. Some were written, some were blazes on the trees. Some were too hard for us to figure out ("What's a hoosegow?" we asked our mother. It was the jailhouse that now rests in my back yard). We spent the entire afternoon on my Uncle Orly's Treasure Hunt, and finally found a cache of lollypops and candy in the mailbox far down the hill at the end of the drive.

I have nothing but supposition to base this on,.but after the loss of his middle son Brian (who has been very much on my mind of late; I'm planning another post about him), Uncle Orly appeared to go into a tailspin. Bad things began to happen. I won't type about them here.

Based on what little I know about their relationship, I would describe Uncle Orly's marriage to Aunt Lucille as one based on mutual disrespect. And yet they married for life, and seemed to have some good times with the bad. If Uncle Orly treated my Aunt badly, he paid for it in later years when his health began to go and he had to rely upon her "mercy." Once he fell on their front step and broke his hip. Aunt Lucille walked right past him, she had a church function to go to and couldn't be bothered, she left him lying there in the front yard. That's probably the most extreme example of how she dealt with him on a daily basis in his last years.

This week, the nursing home called to let her know he was going. She had another church function and that was more important. By the time she got home from that, they had called again telling her not to bother.

From my father's reports of Uncle Orly's final days in the nursing home in conditions that I am certain he found intolerable, I do not feel sad for his loss. But I feel terribly sad for his family and for my father, who loved him warts and all. And I feel terribly sad for me: because it seems like they are beginning to drop like flies, and I know that within a decade's time I'll probably be all on my own. I cried all last night and this morning, and at the same time felt disgusted with myself for all the tears over someone that I never made the effort to know as an adult.

My mother disliked Orly, and she had good reasons, but they were the reasons of grown-ups, and as I've already pointed out more than once I really only knew Uncle Orly from the perspective of a child. Still, her feelings colored mine as I grew up, which accounts for why I regarded him warily on the occasions when we did meet.

For my part, I prefer to remember him as the man who created the legendary Treasure Hunts.