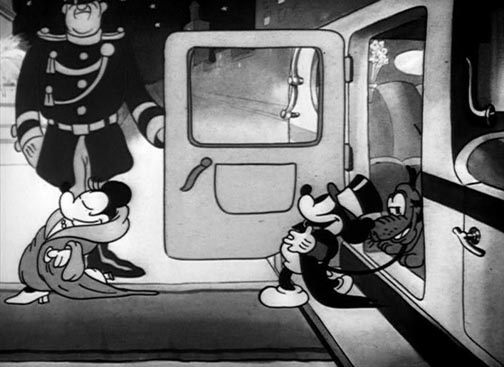 
. . . is one of my favorite Mickey Mouse cartoons ever -- and, really, one of the greatest cartoons of all time. It has no plot whatsoever. A new Mickey Mouse cartoon is having its premiere at Grauman's Chinese Theater, and all of the Hollywood glitterati -- beautifully caricatured by the Disney artists -- turn up for the event. Garbo and the Marx Brothers are there -- hellfire, even Dracula, Frankenstein and Mister Hyde are there, laughing uproariously at all the inappropriate parts.

But that's neither here nor there.

My boss is the sort of person who will never call any job done so long as she can think of one single different way to do it. This is oftentimes infuriating to me, because I am the sort of person who calls a job done if it looks good and feels "right" and complete -- and it doesn't matter if I can think of a HUNDRED other different ways that it could be done. Everything can always be done differently, but will doing it differently make it better? Sometimes you just have to type the period and move on.

What I'm really typing around here is that my restoration / recut of the family home movies had its Gala Premiere at my father's house yesterday, to strongly positive reviews.

I pushed the job through, staying up until past three-thirty in the morning, because I'm basically seven years old on the inside and could NOT wait another day to get the finished product onto a DVD and watch it on my telly.

You know that you're working with some large honking files when it takes four hours to render them, another hour to export them to the DVD authoring software, and another forty-five minutes for the authoring software to compress them for DVD. At a couple of points I just wandered off and racked out on the porch while I waited.

The computer spit out its first disc a little after two AM, and of course I had to sit down and watch the whole thing, all 72 minutes of it (up from about 45 minutes in its original version).

All of which made going to work the next day a little bit heavy.

Over the next couple days I made ten more copies and packaged them up. Yesterday I hand delivered them to Dad, who, although he didn't know it yet, is my designated distributor to his side of the family.

My father's wife was acting extra weird yesterday. While Dad was updating me on my sister's condition following her heart attack (she's having a rough time of it), his wife interrupted twice to deliver lectures about asian cucumbers. What was that about?

All I can think of is that she's not used to having someone else working in her kitchen. I'd brought an eggplant with me to use on her portion. I meant to fry it up before putting it on. Instead, she grabbed it, sliced it -- and threw it into the microwave! Anyone who'd microwave an eggplant hasn't been watching Chef Ramsay as much as I have.

Without even giving me the chance to do it properly, she piled the eggplant so deep on her portion of the pizza (I mean, it was an inch and a half of eggplant stacked up) that all I could think of was "vomit." Sure enough, when it got to the table she took one bite, choked on it and beat a hasty retreat. That's what happens when you interfere with the guy who knows what he's doing.

I don't know how she managed it, but she did come back and choked the whole thing down somehow. She strikes me as the sort of woman who likes to prove a point.

I also learned that she is the sort of woman who, if she sees some job of work that she thinks needs to be done to your house, she will come over to your house while you are away and just do it whether you wanted it done or not. That's another thing that happened this week. I wasn't aware of it until they mentioned it to me yesterday. When I got home, sure enough, there was a metal plate screwed onto the side of my house outside the second floor landing.

You see what I have to put up with?

Moving right along. Dad wanted to watch the movies right then and there, so I had to sit through them again for about the millionth time. I guess my opening scenes were just about as effective as I thought they were, because not more than a few seconds in Dad announced, "I think I'm going to start crying."

Before yesterday, his wife had always refused to watch the home movies on the grounds that they were "his past, not hers" -- fuzzy logic if you ask me. But yesterday she sat down and joined us, and actually paid attention and seemed interested. If it was genuine, and I've no reason to assume otherwise, I call that quite an achievement. After all, I do imagine that there are few things in the entertainment world worse than having to sit through someone else's home movies. If I've succeeded in making them watchable and even enjoyable for people whose past it isn't, then I award myself two thumbs up.

Email ThisBlogThis!Share to TwitterShare to FacebookShare to Pinterest
Labels: Dad, Gordo, movies, on the job, past things