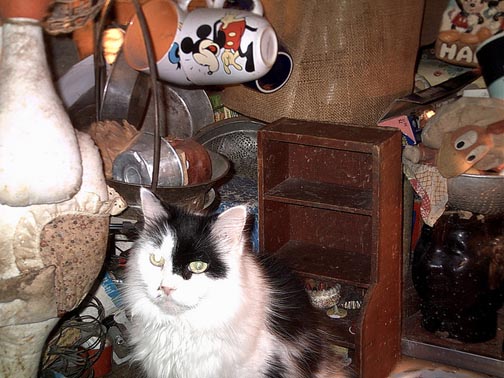 Y'ever have one of those days when you're feeling just plain cranky and mean for no reason at all and you want to punch someone in the mouth just because they're standing there taking up space in your life? That's where I am today.

In E.C. Segar's great Thimble Theater comic strip, whenever Bluto or Popeye or anyone else is in this kind of a mood and spoiling for a fight, they walk around with a scowl on their face, and "GRRR!' GRRR!" sounds fly out of them. I can't afford to scowl or grrr at the customers, but I sure want to.

Rule number one in Customer service: Never Punch Out a Customer.

Patches (my cranky quat in the picture above) has long known herself to be the Queen of the Universe, and whenever I pick her up and hug her and smooch on her and she's not in the mood to be hugged and smooched on, she will grrrrr quite loudly. If that doesn't work, hatpins sprout from her paws, and if that doesn't work her whole body explodes in my face and she vanishes in a puff of smoke.

I wish I could do that stuff.

It's probably why Wolverine is the most popular of the "all new all different" X-Men. Rub him the wrong way and ka-SHINNNG! out come the claws, and who's going to argue with you when you can stick three foot-long razors under their chin at a moment's notice?

I often think that, as super-powers go, the Radio Shadow's mysterious power to cloud men's minds so they cannot see him is a little bit under-rated. Think of how useful that could be when performance review time comes around, or when people come up to you with looks on their faces that say, "I'm going to ask you a completely idiotic question that you've answered a hundred times already this week."

A lot of you already know that the Radio Shadow was different from the Pulp Magazine Shadow, although they were ostensibly the same character. About the only things they had in common were a fondness for night work and a tendency to laugh their heads off at things that aren't funny. The Pulp Magazine Shadow didn't have any super power at all. What he did have were two ginormous .45 automatics that he never hesitated to use. Piss off The Shadow and you could end up pushing up the daisies.

I guess there are a lot of characters in fiction and the movies who we love because they don't take crap from anyone. Humphrey Bogart played most of them. Edward G. Robinson played the rest. I don't count Actual Monsters like Dracula or the Wolf Man, although you want to stay on their good side, too.

People seem to know when I am feeling cranky and then go out of their way to push my buttons. This is not surprising, as most neurotypicals are trained to sense the invisible Target signs that often superimpose themselves over the backs and faces of people like me. I no more than got off the phone with a person who spoke like they had a mouthful of marbles, when a woman came up to me and asked a question -- in a whisper. This isn't a church, lady -- it's a bookstore. Speak up or feel my wrath!!

No, what really gets me is that most inanimate objects seem to know, too. The books and boxes and bits of furniture all seem to be in communication with each other. They begin throwing themselves into my path or refusing to stay where they are put. This causes me to get flustered and frustrated in addition to being cranky, which in turn causes me to become even clumsier. The next thing I know, the whole closet shelf is coming down on my head. If you ever walk by and hear me swearing like a sailor at some inanimate object, now you know why.

I guess it's not a good thing, overall, to be this cranky -- but it's better than some other emotions I could be feeling.