Robert Wise and Me 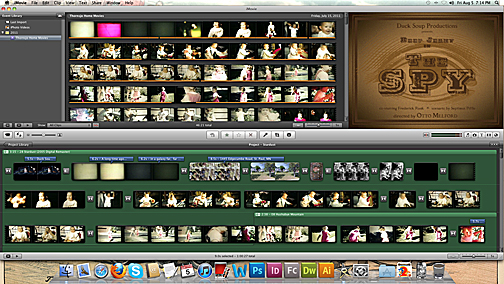 When I was in, I think, the eighth or ninth grade, I made a (very) short film. It was supposed to be a comedy, but it was really just a bad joke in more ways than one. It told the story of a Wacky Spy who steals a Top Secret document only to have it blow up in his face.

I was terribly disappointed in the end result. With no means of editing, we shot it in sequence and in one take for each shot. All the fluffs ended up in the "finished" piece. To make matters worse, I was shooting indoors with outdoor film under low lighting conditions, in the hope that this would give the finished film a yellow, faded "silent movie" look, the way it had done with one of the reels of home movies my dad had shot years earlier. Imagine my dismay when the film was developed and gaudy, bright seventies colors flooded the screen.

I didn't even get the title cards framed properly. They were dumb and unfunny enough to start with, but in the "finished" film you couldn't even read them. My venture into comedy film-making was an embarrassment.

I can only suppose that Robert Wise felt a bit that way about his venture into Star Trek movie-making. Star Trek: The Motion Picture was made under appalling conditions, with a script that was never finished and a schedule so tight that the movie went out essentially uncompleted. It never had a proper post production, no time for a sound mix or foley work, so the bridge of the Enterprise was dead silent. Effects shots were still arriving the day before the premiere and they were not what Wise wanted, but he just had to cut them in as-is. The next day he hand-delivered the "finished" film to the premiere. The print was still wet!

So in 2001 he jumped at the chance to do a "Director's Cut" that was far more elaborate than these things usually are. With a rule in place that his crew not do anything that wasn't possible in 1979, Star Trek: The Motion Picture was completely rebuilt from the ground up. A new edit restored scenes that got lost in the rush of the original release, and removed dead weight; new effects shots were created, the picture was finally given a proper sound mix. Wise got the chance to complete his unfinished movie.

With the result that it is no longer the worst movie in the series. In fact, it's jumped both The Final Frontier and The Search for Spock to land in the number three position (I'm only counting the films that feature the original cast). Granted, that's not saying much, as both of those other movies are dismal. But Star Trek: The Motion Picture, with all of its story flaws still intact, now at least possesses a professionalism and polish that makes it worth sitting through.

And now I'm getting the same chance that Robert Wise got! Thanks to Apple's iMovie software, my stupid little one-joke "comedy" is getting the post-production that it so desperately needed.

The first thing I did was strip the color out. What an improvement! There's a reason why the great comedies (and even some bad ones like mine) are all in black & white: color distracts and overwhelms. In this case, the black and white also highlights the scratches and age of the film, which I like. And it's now (slightly) less obvious that I shot this in my bedroom and the upstairs hall of our house!

Next the flubs came out. At one point I walk into a wall, and then spoil the take by grinning. At another point I freeze in my tracks and tell the cameraman (my dad) to "Cut." You get the idea. A few frames of film shaved, a cross-dissolve added here, a fade to black there -- goodbye flubs!

Thanks to some stock photography I was able to add establishing shots, exteriors, that will help set the stage and clarify things: a "top secret government facility" (actually the Googleplex) and an "international spy organization headquarters." I'm creating new title cards and insert shots in Photoshop that are at least legible and, I hope, slightly more humorous. Finally, I'll score some silent-movie music from one source or another, and Voila! My stupid old one-joke "comedy" will no longer be quite the embarrassment that it once was.

It's still going to be a stupid little one-joke "comedy," nothing can change that. As with Star Trek: The Motion Picture, the raw material is what it is. But I'm having a ball and learning new things and who knows? I've always wanted to write a script. With the tech that's out there now, all things seem possible. . .

Email ThisBlogThis!Share to TwitterShare to FacebookShare to Pinterest
Labels: movies, past things, starting over