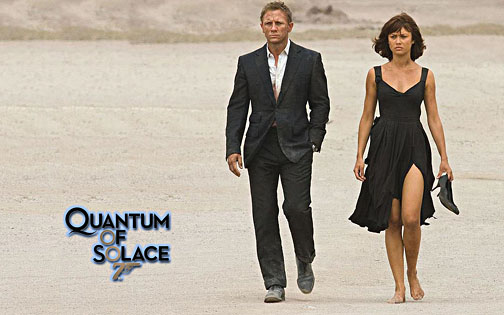 When Pierce Brosnan took over as James Bond, his debut vehicle, GoldenEye (directed by Martin Campbell), was absolutely smashing. But the follow-up, Tomorrow Never Dies, was just exactly half as good, and they kept getting worse after that.

Yeesh, I hope the same thing doesn't happen to Daniel Craig. I'm on record as thinking Casino Royale (also directed by Martin Campbell -- do you sense a pattern here?) is one of the best of the entire series, right up there with From Russia With Love, so I was scared away from the theatrical release of Quantum of Solace when its reviews skewed so very negative. A friend of mine assured me this weekend that Solace was "even better" than Casino Royale. So when I found it in the five dollar bin at Wallyworld (at  least I didn't overpay for it) I took a risk.

Alas, my friend was wrong and the reviewers were right. Roger Ebert hit it on the nose: Bond is not an action hero!

Following the worst theme song and opening credits sequence ever, the first hour of Quantum is a complete write-off, with one annoying action chase (usually poorly shot, all quick cuts and herky-jerky camera moves) after another. In cars, on foot, in boats, lord knows what all else, for nearly fifty-five minutes things hurtle about and poor Daniel Craig barely gets the chance to speak.

This is not what makes James Bond James Bond. Of course you want a big action set-piece to begin the movie (I would have cut the opening car chase -- a waste of screen time if ever there was one -- entirely and begun with the questioning of Mr. White and the subsequent on-foot chase between Bond and Quantum's mole. There, you see? The movie's better already!), but Bond's main weapon is his personality, and the screenwriters and directors seem to have forgotten that here.

When, finally, things calm down for half a tick and Craig is actually allowed to speak and play the character, Quantum of Solace at last begins to feel like a James Bond movie -- but by then it's more than half over. This isn't so much a James Bond movie as an episode of James Bond tacked on to the first hour of one of those Fast and Furious waste-of-timers.

Daniel Craig may be the best actor to ever take on the role. He brings a genuine gravity and even some heart to Bond that Bond never had before, and most of this movie squanders it.

My advice to the Broccoli family is pretty simple: Don't stint on the director's fees. You have a guy who gets it, who knows how to do it -- Martin Campbell, Use him, please. I'd rather see his name on a Bond picture than on Green Lantern any day.