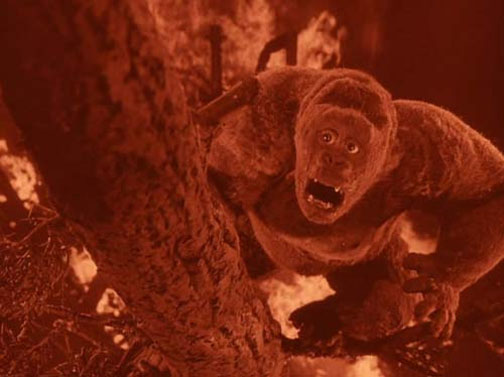 Last night TCM ran the original Mighty Joe Young. I didn't need to watch it; have seen it many times and own the DVD. But with nine thousand channels on tap there was absolutely nothing else worth playing while my dinner defrosted, so I did take in the first few scenes, right up to the introduction of the grown-up Joe.

I think I like this better than King Kong, because it's got heart (if anything, heartless is the word to describe Kong, with its merciless treatment of man and dinosaur and ape alike) -- and a good deal of flat-out schmaltz. I like schmaltz, if it's not forced or artificial, and the thing about Joe is that it's remarkably genuine. I saw it first sometime before I reached my teens, and while it's not exclusively a kid's movie, that's the perfect age to see it for the first time. Its scary bits and melodramatic bits all prey on a child's innate fears, and at the same time the whole wish-fulfillment thing of having a giant ape for a pet is expertly calculated. Although as a boy gets older, that scrumptious Terry Moore becomes the character you'd rather have by your side.

How do I know when something is just perfect? It's embarrassing to admit this, but it makes me cry. That's why I often weep over things in movies and books that aren't at all sad. I know. It annoys me, too.

But the climactic scene where Joe rescues the little kid from the burning orphanage? It's just perfect. And it gets me every time, from the first time I ever watched it right up to now.

Thankfully, I didn't get that far last night. Don't know if I could have taken it! As it was, even the opening scenes with the little girl falling in love with Joe and bartering for him were getting to me. That little girl is just perfect. "Oh, I'm being very naughty!" But does that stop her?

We couldn't move on to the city and Robert Armstrong soon enough to please me, and watching it this time I experienced a real Coin Drop. If there are any comics fans out there, get this: isn't Robert Armstrong as Max O'Hara the obvious model for Spider-Man's J. Jonah Jameson? I mean, it's exact! The haircut, the 'stache, the moodswings, the fabrications -- it's all here! Stan Lee rather famously never created anything original in his life -- what he did was to cleverly re-combine existing things in new and interesting ways, and lend them a contemporary attitude. When he was casting around for a foil to play off of everyone's friendly neighborhood Spider-Man, Max O'Hara is surely what must have come to mind!

The other remarkable thing about Joe is that he still holds up remarkably well as a special effect, even in today's CGI-saturated world. We're aware that we're looking at something real, not a digitally generated illustration. By this time, Willis O'Brien had perfected his many tricks and techniques for combining animation with live-action, and he had the added benefit of having the extraordinarily gifted young Ray Harrihausen on his team. O'Brien was a pretty good "actor," too -- he always got great emotion out of his puppets, never more so than here.

My dinner, by the way, was "Frozen Mexican Stuff." It wasn't horrible, but I could have gotten better at Buen Apetito just two minutes drive from my house. Oh, well.