Down the Road a Piece 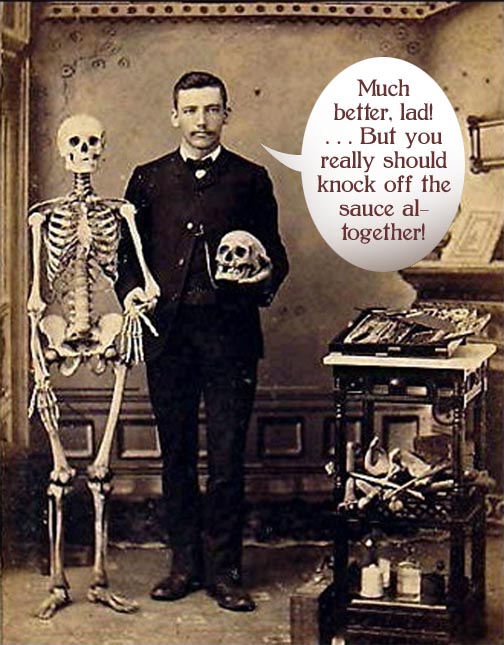 Up at an ungodly hour to get out to Albion by 8:00 AM for my three-week follow up with the doctor. It went so smoothly and quickly that I got back into town with time to kill. I was able to do my grocery shopping, take it all home and unpack it, and still get to work fifteen minutes early.

Last time I went out there, by blood pressure was 171 over 110, and nobody even wanted to discuss my liver. I was drinking nearly half a bottle of vodka every night, and for all of the Wrong Reasons -- only slightly less than what put me in the hospital last year around this time.

It all started with that disastrous experiment a couple of months back of cutting the Prozac dosage in half. By day three, as you may recall, I was crying all the time. The little detail that I left out was that I immediately returned to self-medicating in a big way, draining the bottle to numb the sadness and stop the tears. You start drinking for those reasons, that's when you're really in trouble. You think you need more all the time, but what you're doing is feeding the Melancholy Beast -- which immediately starts to demand more. And I didn't stop when I felt the drug begin to kick back in -- the Prozac never seemed to work as well after that. I never made the connection.

It wasn't easy at first, but I managed to dial back significantly on the vodka. . . and the difference it made on my emotions was, as I told the doctor, both immediate and dramatic. That, in turn, made a deeper reduction possible. I can drink in moderation when my emotions are under control. When they're not -- forget about it, all bets are off.

My blood pressure today was 144 over, I think, 98 -- still high but within the acceptable range, or so I am told. At least, he didn't make me go on medication for it, which is a triumph all by itself. As well, I know -- for reasons that we won't get into -- that my liver is doing better.

Of course I got the speech that I should stop altogether, and I know that my doctor is right about this. I'm not in denial. I know and am the first one to admit that I'm an alcoholic. It's not for nothing that I've labeled dozens of posts here with the word "alcoholism." When it gets out of hand as it did recently, it ceases to be a pleasure and becomes a problem that needs to be brought under control. But I've no interest at all in stopping completely. I won't make any excuses about that. It may well be, as the doctor suggests, that this is the addiction talking, but if so, it's not talking alone. With my whole heart and conviction, I say to you: I have few enough pleasures as it is. Not giving this one up, at least not now.

Lesson learned: that I'm on Prozac for life. Because if I ever try to get off of it again, it could shorten my life by a considerable bit. . . for more reasons than just one.