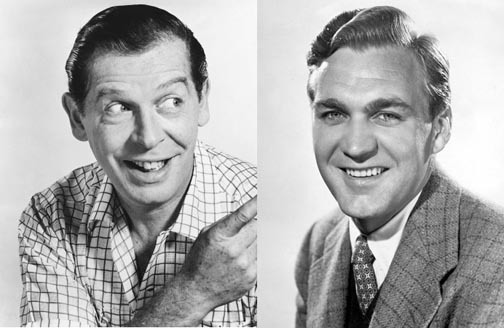 I have NO idea why this popped into my head this morning, but I can tell you why I remembered it in the first place, and it's one of those things that, if you haven't heard it already, you'll wish you didn't know. So, be warned before you read on!

I learned it from a book about the early years of Saturday Night Live. (Gad, it's a bit on the depressing side when they start publishing histories of things you were there for!) One of the writers (and no, I can't remember his name) got his start writing "roast" jokes for Milton Berle, so when Uncle Milty came to host Saturday Night Live, they had a chance to sit down and talk about Olde Times.

And the writer said something along the lines of, "Funny, my having to write all those jokes about your penis..."

Uncle Miltie replied, "You mean you haven't seen it? Do you want to see it?"

That's why I can't purge this story from my memory. Milton Berle was everywhere when I was growing up, even on Batman fer crine out loud, and his range of expression is embedded in my mind, and I can just hear his voice and see the expression on his face when he said those words.

The writer then went on to describe Berle taking it out and laying it across the table, and that's where I'll stop.

A couple of years later I was working as a typesetter for Thorndike Press (the best job I ever had and probably ever will have, until the Evil Corporate Bastards at Thomson/Gale laid off the whole production department). Late in the game I had to set a book by Jack Lemmon's son. It was a memoir about their golfing experiences together, pretty dry stuff. The best story in the book was about Harpo Marx and his ongoing battle with a tree on a particular golf course. Harpo seemed to hit it every time. He finally put the tree out of his misery by sneaking onto the course one night and chopping it down!

But the book also contained a postscript to the Berle story. One day, in a private room at the Hollywood club where all the stars played golf, with Jack Lemmon and his son present, Milton Berle and Forrest Tucker got into an argument. Call it a cockfight. They had it out, so to speak, right then and there, and Berle, in the words of Jack Lemmon's son, "won by a head."

Now I know why Corporal Agarn was afraid of Sergeant O'Rourke.