Venus and Mars are all right 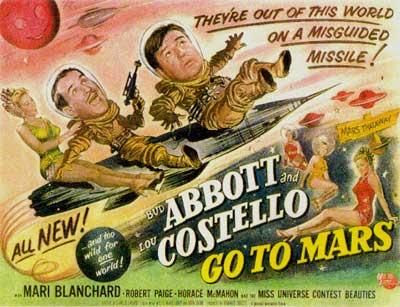 Desperately needing a break from Woody Allen's self-serving period, last Friday night I put on ABBOTT AND COSTELLO GO TO MARS. Not Bud and Lou's finest hour, I'm afraid. So far from that is it that I nodded off about 15 minutes in and had to finish it up Saturday morning. Even then it had me fighting off the Sandman.
I only have it because I wanted to replace a copy of A & C MEET FRANKENSTEIN that I taped off the air when our local PBS station ran it. Per usual, they got the reels out of order (this station was notorious for that. Can you imagine watching CITIZEN KANE for the first time with the reels out of order? They managed to do it!) -- so that's the only way I've ever seen Bud and Lou's best venture into scare comedy. I thought it was about time to trade up.
I could have bought the movie separately, but for a lower price I could also get this set with seven other A & C movies included. I thought that was a no-brainer.
If MARS is any indication, I might be wrong. This pure studio comedy is not without some chuckles (and some of those Venusian women are certainly out of this world). But any two comedians could have starred in this SF-mock-up. There's too much of spaceships running wild and not enough of Bud and Lou doing what they do best.
I hate Bud's mustache, too!
In its favor, there is a great Mardis Gras sequence with nifty costumes and masks galore. Really cute, and worth the price of admission by itself. I kind of live in that scene, in a house full of masks and parade animals and carnival toys and more. My mother would have gotten a kick out of it.
-- Freder
Posted by Freder at 3:18 PM