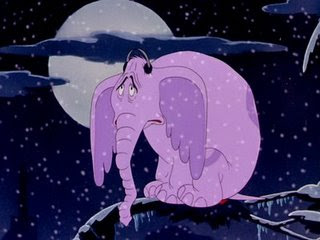 Working my way through the LOONEY TUNES GOLDEN COLLECTION, vol. 5, at the rate of one cartoon a week, Friday nights. I always start with disk four, because that's where the non-character 'toons are dumped. Sometimes I can't believe how ordinary and dull these one-off cartoons are. Without Bugs or Daffy or the others, it's just pretty much the same old jokes with different and notably unmemorable faces on them. It's Hummer Time is a perfect example: the same exact shtick as a Tweety and Sylvester cartoon with a generic cat and a generic bulldog and an insouciant hummingbird sitting in for Tweety.

BUT -- it's all worth it to finally get to see Chuck Jones's adaptation of Horton Hatches the Egg, something I've known about for years and never had the chance to see until now. One of the last cartoonish "Holy Grails" on my quest (still eluding me is Coal Black an' de Sebben Dwarfs -- yes, it's reputedly just as racist as it sounds).

Horton is just as much of a delight as I imagined it would be. Chuck's first collaboration with Geisel is even better than How the Grinch Stole Christmas. The Warner artists really get the good Doctor's style down, the voice work is hysterical, and although some liberties are taken to make the thing feel more like a Warner Brothers cartoon, that kind of silliness works well with Seuss.

So glad Mom got to see this before she died. Horton was a favorite of hers since its original publication.

Email ThisBlogThis!Share to TwitterShare to FacebookShare to Pinterest
Labels: cartoons