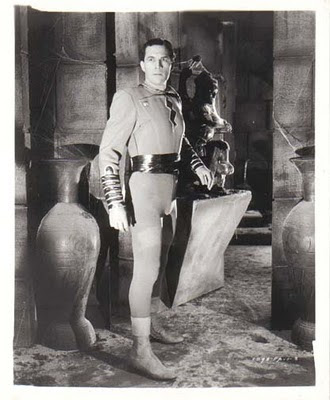 Some folks drink and drive. I drink and watch telly. Last night it was an episode from the first season of THE ADVENTURES OF SUPERMAN. Even the Robot was lame. The only good thing was seeing a young Russell Johnson (The Professor on GILLIGAN'S ISLAND) in a pre-professor role as a gangster. He put on a heavy gangsterish accent and tried to put the screws to Phyllis Coates as Lois Lane. Can't say that I blame him.

Tonight being Friday, it is Movie Night. I haven't decided on the feature yet, but I always lead in with a cartoon, a comedy short, and a serial. Currently slotting Laurel and Hardy and Republic's 1941 THE ADVENTURES OF CAPTAIN MARVEL into those latter two spots. Tom Tyler looks perfect in the costume, but the poor guy -- his speaking part is pretty much limited to "SHAZAM!"
Posted by Freder at 4:40 PM