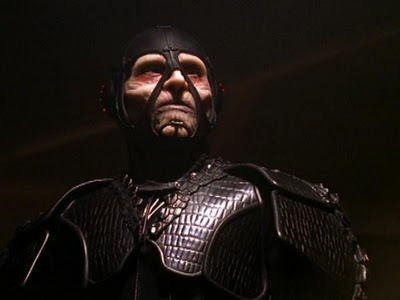 I have to agree with Wayne Pygram, the actor who portrayed him, that Scorpius was somewhat emasculated in the fourth and final season of Farscape. This observation brought to you  by the fact that I watch almost no broadcast TV, and am my own CEO for Programming in the Duck House, and Farscape is my Monday night fare.After three seasons engaging in the kind of villainy that makes Dracula look like a piker, Scorpy was ousted from his job and, like Lani Tupu's Crais before him, joined the crew of Moya. Presumably this was to give him closer proximity to work his deviltry -- instead it had the unwelcome effect of making him seem, well, domesticated. Even chummy. A very sad fate for any villain with a sense of pride in himself.

Scorpy is the very model of a self-made man, a half-breed at war with his own body. There's something poetic in the way that he defeats his inner villain on a daily basis just so that he can act like his own brand of Nasty Business. Villains are always best when they have a little bit of hero in them that they choose to ignore. Scorpius doesn't have Doctor Doom's sense of nobless oblige, and he certainly wouldn't visit hell once a year to wrestle the Devil for his mother's soul -- but there's something to admire in his battle of bloodlines.
Posted by Freder at 3:20 PM