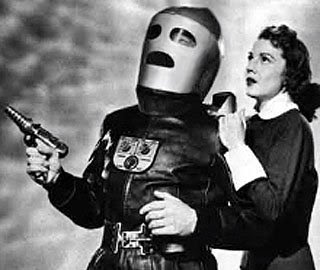 Another busy weekend of VHS duplicating to help trim down my shelves. This time I started with a 1939 Republic serial called ZORRO¹S FIGHTING LEGION, with Reed Hadley behind the mask. You can tell that Disney watched this interpretation of the character, as there are many close similarities to his later TV series starring Guy Williams as Don Diego; still, Disney opted for far less flamboyant and bombastic villains than Don Del Oro, a kind of Mexican Dr. Doom who lumbers about in a suit of golden armor while spouting off in truly stentorian tones.
I watched only parts of it, to make sure the VCR was still working properly, but was reminded in nearly every scene that 1937 to 1942 were the golden years of Republic serials, and ZORRO'S FIGHTING LEGION may be their very best one of a Western theme.
From there it was on to CRUSADER RABBIT, a very early effort from the creator of Rocket J. Squirrel, Mr. Jay Ward. These are more like TV Comics than cartoons; the animation is way beyond "limited," with nothing more than extreme poses switched out every few seconds. Unlike ROCKY & BULLWINKLE, there is relatively little for adults to pick up on, and the emphasis is on cute and whimsical rather than linguistics. But the episodes are short (just four minutes each) so, as long as you don¹t watch them in a marathon, CRUSADER never outstays his welcome.
However, the video did run significantly longer than what it said on the box. With two CRUSADER episodes sitting alone on a disk, I was forced to change my plans. A tape full of Max Fliesher KOKO THE CLOWN shorts followed, and I filled out the disk with the only three SPACE GOOFS cartoons that I own. This is nothing more than a cross between REN & STIMPY and REAL MONSTERS, but it's cute: pop-art space aliens living in an attic until they can find a way to repair their spaceship. Interesting the Gaumont, a French company, was behind it.
And I wound up the weekend with KING OF THE ROCKET MEN. This 1949 Republic serial (inspiration for THE ROCKETEER) would be strictly ho-hum stuff if not for the colorful title character, perhaps the most iconic original design to come out of serials. The flying scenes engineered by the Lydecker Brothers are pretty convincing, too.
That makes SIX chunky VHS tapes reduced to four DVD-R's. . . There¹s a lot to like in that picture. A friend of mine calls it "Addition by subtraction."
Posted by Freder at 10:06 AM