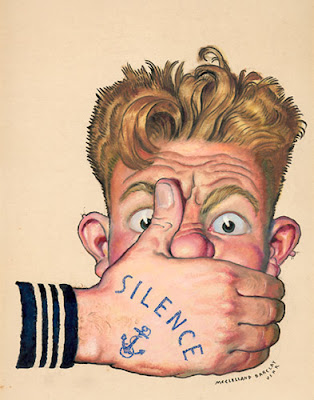 I keep on biting my tongue. No, I mean really! It hurts and everything! It's been going on for two weeks now. My tongue has a welt on it and eating crunchy foods hurts like crazy.
I suppose if I had learned to bite my tongue in the metaphorical sense much earlier in life, at least some things might have turned out for the better. At the very least, I would have a more appealing job than I do know, and would be better off financially.
But just as many good jobs have disappeared out from under me through no fault of my own as have the ones that I ruined by opening my damn fool mouth over one thing or another.
Y'know that godawful thing they do at company meetings of going around the room and making everybody say their name and title? I just hate that. There was a day when I would (and did) give a fake name or a title like "Dogsbody"or tell a one-line joke (a deliberately bad one).
But if you say something out of the ordinary at one of these functions (it doesn't matter what it is) no one ever laughs. They just look at you funny, and you are forever marked as a troublemaker, when all you were really
trying to do is relieve the boredom.
Maybe I should have bitten my tongue a lot more often in those days. I'd give just about anything to make it stop now. OUWWW!! It just happened again!
Posted by Freder at 11:48 AM

Email ThisBlogThis!Share to TwitterShare to FacebookShare to Pinterest
Labels: regret