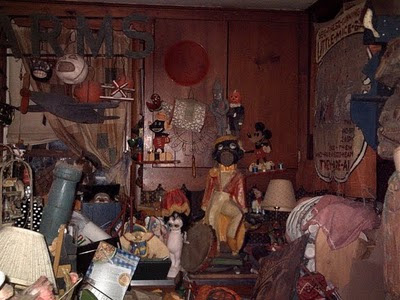 I spent much of the weekend trying to make the kitchen navigable. Didn't quite make it, but I can see the breakthough from where I am. It used to be that the only way to wind the kitchen clock was to climb over the back of the easy chair I sit in every night. Soon I will be able to walk in and do it.

I threw out eight big, heavy garbage bags full of newspapers, newspaper clippings, catalogs, Martha Stewart magazines, Mary Englebreit magazines, Country Living magazines and more. At first I was looking through them and keeping the ones that had articles that interested me. But the volume of what my mother had packed away under the kitchen table turned out to be such that, by Sunday, I was just pitching stuff, filling one bag after another and moving on. She had file folders behind the table with tax returns dating back to 1996. I wasn't interested in her financial affairs back then and I'm not now -- they went. She had folders of lease agreements on the shop in Wisxcassett, defunct now many years -- they went. She had saved the advertisements I designed for the shop. I kept a couple of representative examples -- the rest went.

The books were another matter. There were stacks of books on collecting this and that, toys and Quimper and Disneyana and Folk Art and black Americana. Price guides. These I kept, and will have to go through them later to see if there's anything I want to hang onto. They went upstairs to the spare room where all of her other books are stored. One heavy load after another. I had to take two garbage bags of magazines out of that room in order to free up space for what I was bringing in.

There were baskets of paints that I don't know what to do with, and a bag of material, mostly felt, that she used to make her jack-in-the-boxes, but which had been behind the table, inaccessible, for too long and were to foul to keep.

'Way back, some of the magazines had been "found" by a couple of generations of cats, and shredded, and used as a makeshift cat tray.

Once in a while, something neat would come to light: a book or a toy; my favorite was a decorative metal Halloween lantern that had been buried in the corner for who knows how long. I kept it, it's really cute, it's hanging in my bathroom now.

I cleared out so much that I am now able to walk around the end of the kitchen table. This hasn't been possible in years. Next weekend I finish the job, and in the words of Jim Morrison, finally break on through to the other side.

Mom couldn't do this kind of work and cleaning in the last five years of her life, and I didn't have the time. Now it seems that time is all I have, and I'm frankly doing this work that I hate just to keep busy and make the day go by. Even with five very demanding cats to keep me company, the loneliness is starting to sink in.

A word about the kitchen table. It is a long wooden picnic table that my mother hand-carved and painted, with place settings for the whole family, a centerpiece and even a cat. It may be her magnum opus. I can't show you a picture of it, because it can't be seen for all of the toys and dolls and folk art.

The other rooms aren't so bad -- they weren't used as storage for magazines! Still this is just the beginning. . .

Email ThisBlogThis!Share to TwitterShare to FacebookShare to Pinterest
Labels: Funhouse, starting over