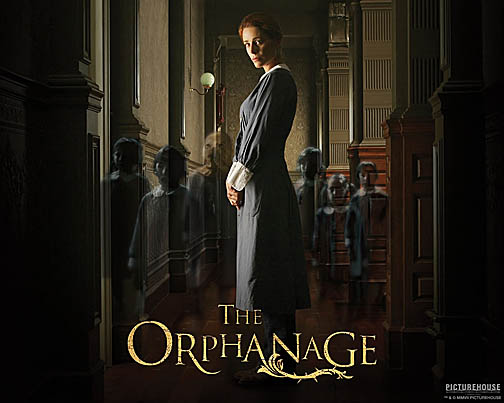 The Orphanage has been on my radar since its 2007 release, but the R rating, which when it comes to modern horror films usually means that the movie is weltering in blood, gore and depravity, scared me away. Only when I'd read some reviews and talked to some people who'd seen it (who assured me that this wasn't the case) did I dare to attempt it -- and then only when it turned up in the $5 movie bin at Wallyworld.

Now I wish that I hadn't waited. This Spanish/Mexican film is as striking and startling as Clouzot's original Diabolique, and even more haunting for being more substantive.

I can't detail the plot, other than to say that, yes, it's set in an old Orphanage, and yes, it is a ghost story. To say more than that would risk revealing details that could ruin the effect. Let's just say that for ninety minutes it is one of the most frightening, suspenseful movies I've ever seen: and then in the last ten minutes as everything starts to come together and the viewer realizes what it's really about, what really happened, it turns so sad, so terribly sad, that I burst into tears.

For ninety minutes, it plays on our fear of the supernatural: only to come down to earth to reveal that Reality can be so much worse.

It accomplishes this without any of the usual modern horror tropes of gore, torture and, with the exception of just one real shock that comes at the exact center of the movie, sudden, graphically explicit death.

This is yet another case of the MPAA acting irresponsibly. This is a much graphically milder movie than say, Jaws, which went out with a PG rating in its original release. If you can take Jaws, you can take The Orphanage. It warrants a PG-13 rating more for its general atmosphere than any specific scene. Instead, the MPAA slapped an R on it, lumping it with depraved torture porn like the Saw and Hostel franchises -- movies that arguably don't even belong in our neighborhood multiplexes, and which, it can certainly be argued, should carry at least a rating of NC-17 or X.

Speaking of women, The Orphanage is built on the backs of two remarkable performances from two remarkable women. Belen Rueda gives such a finely-tuned characterization that we, the viewers, become as unstuck and adrift as the woman she plays: it's a thunderstorm of acting, encompassing grief, determination, despair, nightmares of fear, disbelief, belief and loss. She has a great look: a little worn-out, a little tired, a little sad even before the bad things start to happen. She holds the connections to both the past and the present of the orphanage, but she cannot get them to tie up; and although she may or may not become increasingly unstable as the movie rolls along, it is through her eyes that we must watch the events unfold.

The other pivotal role is taken by Geraldine Chaplin -- yes, Geraldine Chaplin, Charlie's daughter, a skilled actress in her own right, here speaking Spanish like a native and looking so fragile that it seems like she might waste away at any time. She plays a medium who puts the Rueda character on the path to . . . I don't know if it's success or failure. Call it Destiny. With her hands and her eyes and the brittleness of her demeanor, Chaplin seeks and compels, and in one of the most hair-raiing scenes in the film, seems to make a horrifying connection to the past, and allows us to listen in.

This is an impressive effort from a first-time director, one that relies on suspense, not gross-outs, and which in the end proves itself to be deeply humane -- exactly the opposite of most modern horror films. It's a movie that will stay with you long after the credits roll -- a ghost story that literally haunts.

New Line has bought the rights to re-make it in English, and this just sickens and disgusts me. Our American movie industry is incapable of doing anything original -- instead they buy the rights to other country's original works of art, re-make them, and drain all the goodness and life out of them in the process. I won't support the American version and you shouldn't, either. Instead, truck on down to your local Wallyworld and root about in their five-dollar movie bin. It would cost you more to see something in a theater. Take a flyer on The Orphanage in the original Spanish. It's well worth your time.