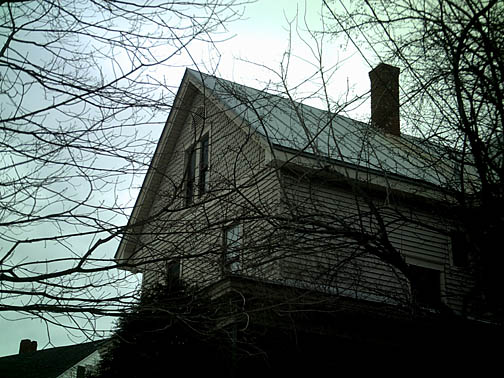 Today has seen yet more gloomy and dismal skies, and I guess everyone knows what that does to me by now. I won't go on about it. Other than to say that it's too chilly to run the fans and too moist and humid not to. Today I was going to attempt work on a ghastly short story that I started, oh, a couple of years ago now, but so far have not felt up to it. Just now I discovered that I hadn't even moved it onto this computer.

Yesterday was also humid, but sunny and hot. So for me, it would have been better to have swapped the planned activities around. Yesterday I played lumberjack.

I'm normally against cutting anything back, I am a pro-growth sort of person. I like it when foliage takes over the property a bit. But the tree growing beside my house -- I don't know what flavor of tree it is, but I like to think of it as my monkey-puzzle tree for the ways that its branches have writhed so confusingly amongst each other, even though I just looked at pictures of a real monkey-puzzle tree on the interwebs and mine looks nothing like it -- was causing problems. It's branches were pressing on the side of the house and actually laying on the roof, which made it impossible to rake snow off in the winter, which caused an ice dam to form (damn) which caused a nasty leak inside my porch where all my unread books are kept.

We kill trees to make books (although in the case of Nicholas Sparks I think it would be better to kill him), and what I was proposing stopped far short of killing the tree. Just sacrificing some limbs in the service of preserving literature (and home!).

So it had to get a trim. Just two branches would do the job. They were wild and crazy branches. I don't own a chain saw (and wouldn't -- they scare the crap out of me!) and I quickly discovered that my rusty handsaw wasn't up to the job, so I got my axe out of the garage and started whaling away at it. I'm actually pretty good with an axe, knowing how to use it and having a good swing, but my axe is dull and it was a hot day, and there were frequent pauses for huffing and puffing. The first branch came down reluctantly, and the second one was worse: it was high enough that I had to stand at the top of my stepladder on uneven ground and strike with the axe well over my head. Even then I was afraid it was going to drop right into my face. So for once in my life (usually these sorts of projects really bring out the Dumb in me) I did the smart thing: when it started to crack ominously I climbed down, gripped the lowest branch and pulled it the rest of the way.

Then of course I had to break these crazy branches down so that I could dispose of them. The thin ends I dragged to the wild ground at the edge of my property and threw them in. The heftier stuff I chopped up to use as firewood in my fire pit out back. I could have knocked off at some point and finished it up another day. But I was determined to get it done, although I was so exhausted by then that I could only get about four or five whacks in before I had to stop and catch my breath.

I hadn't planned for this to be the only thing I got done yesterday, but that's the way it worked out. I guess that's why chainsaws were invented. I'd have been done in nothing flat. Instead it took a big chunk of the day and I was so shagged out afterwards that all I could do was grab a shower and drag myself to the porch sofa, where even looking at the White Flower Farm catalog proved to require more effort than I could bring to it.

My neighbor has a chain saw, sitting enticingly out in the open. Perhaps he left it in plain sight to frustrate me when he heard me chopping myself silly. But they don't attempt to talk to me any more, which I guess is a pleasant side-effect of the "Midnight Mowing" I did a couple of weeks back. Oh, yes I did! Just after midnight on the day that I was woken at seven AM by Millie the Morning Mower, the Evil Bugs Bunny in my soul got the better of me. I opened the window of my playroom and blasted loud music in the general direction of their house. After about fifteen minutes of that I went out and fired up the lawnmower. I did that whole side of my house (poorly, because after all it was past midnight!) and occasionally growled at their house, out loud, "You get the message, Doc?"

Apparently they did. Just yesterday I went out and found their lawn miraculously mowed. They must have done it the day before while I was at work, because I never heard a sound!

Revenge is a dish best served with a freshly-mowed lawn.

Email ThisBlogThis!Share to TwitterShare to FacebookShare to Pinterest
Labels: gardening, The New Haus, The New Neighbors