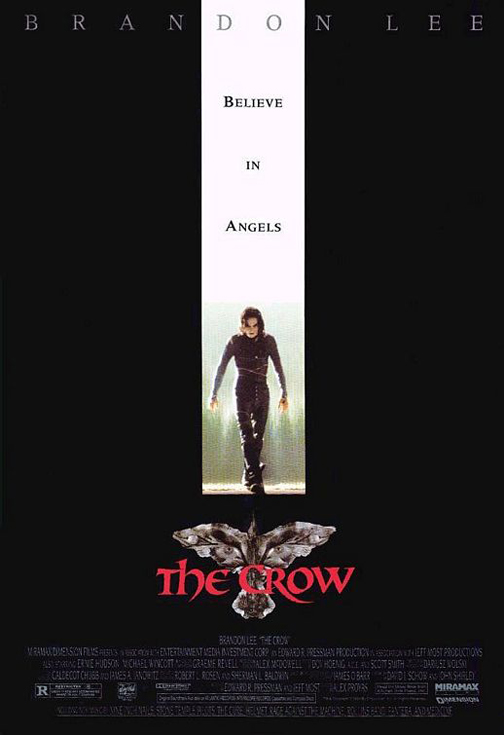 Does BBC America have the worst programming directors in the history of television?

I mean that rhetorically, of course.

Why do they even call it BBC? Most of the programming is recycled American crap. Star Trek: The Next Generation every damn night! I think once a month they buy the rights to about two movies, and then run them over and over again. For the past month every single Friday night it's been two hours of Top Gear (a show I simply don't "get," and one which BBC America runs incessantly) followed by the original Clash of the Titans. Every single Friday night! How freakin' often can you watch Clash of the Titans? I had a tough time getting through it once. (Hello, Larry? Did you phone in your performance, or what?)

At least Clash and The Next Regurgitation have British people in them. Now, The Crow -- I'm sure the BBC programmers chose that because it represents the essence of the British Empire, yes?

I actually tried to watch The Crow. I thought that I might like it. Alas, it stinks in the way a movie can only when it is made by people who are so bereft of talent or skill that they have to murder their lead actor in order to get PR for the thing.

It is one of the more nonsensical movies I've ever seen. Nothing adds up. The city burns every night, apparently just for effect. Nobody fights the fires. After a few nights of this, there wouldn't be anything left to burn. The reason The Crow paints his face white is because he once playfully spooked his wife with a theatrical mask. Say what? (Plus, it's an ugly theatrical mask that no one in their right mind would own in the first place!)

How is it that the Brandan Lee character comes to rise from the dead, anyhow? People don't un-die just because they're pissed off. I know this is a comic book movie but even comic book movies need to have a certain internal logic. The Fantastic Four got their powers from being bombarded with Cosmic Radiation. Superman gets his from a yellow sun. We know what motivates The Crow (ugliness), but what animates him?

In no time at all he's mopping up the street of those vile Bad Guys that did in him and the missus, and although the ugly tone is consistent, there's no suspense in how it all plays out. I switched it off after the first one. I knew where it was going, and I didn't care. Life's too short. If that's The Moral of The Crow, then at least its producers did something right.

The other night, the Beeb ran Mel Gibson in The Road Warrior. Well, at least that's Australian. They're getting warm.

I hadn't seen The Road Warrior since it's original release, and now I think it's almost the opposite of The Crow. Oh, it's every bit as ugly and mean, and its premise is every bit as stupid, but it's so quirky and well-made that I couldn't take my eyes off it. The ugliness plays out in desert sunshine instead of darkness, and the mean-spiritedness at its core has the weight of a Philosophy. The villains aren't just generic Depraved Killers. They have an inspired lunacy and are almost Grand Opera in their appearance and actions. The final act, and especially the ending, has real bite.

I was dismayed, however, that the Beeb gave it a rating of "TV-14." This was an R picture when it came out, and deservedly so. It is not okay, in my house, for a fourteen-year-old to watch The Road Warrior.

If it wasn't for Doctor Who, Ramsay's Kitchen Nightmares and the endless farting marathons of Top Gear, there wouldn't be anything British on BBC America. And now Doctor Who's gone on hiatus. D'you know what they replaced it with? Battlestar Galactica!

It would be funny if it weren't so pathetic.