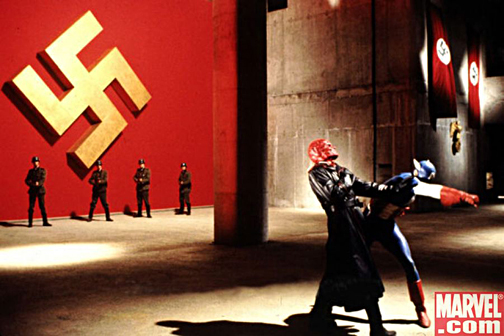 As a tie-in to the current release of Captain America: The First Avenger, Syfy recently ran a marathon of all the previous Captain America movies, barring only Republic's 1944 serial (which never had much to do with Captain America anyhow).

In the comics, Cap actually had three lives, one of which most people prefer to forget. In the 'fifties, he was a Commie-bashing crusading district attorney -- an incarnation deftly explained away by writer Stephen Englehart during a brilliant run in the '70s. The Captain America that concerns us here is the one that links the two halves of the twentieth century: Steve Rogers, the Living Legend of World War Two, and the 'sixties icon lost out of time, struggling to find himself once again.

The two '70s made-for-TV movies starring a nonentity named Reb Brown have little to do with this figure. The producers seemed determined to turn the character into a bland, generic '70s TV action hero, and seemed embarrassed by the costume. These two pilots were bad even in their day, about as close to the bottom of the barrel as comic book movies can get, and their stench has actually ripened with age.

In an era of fast talking and quick cuts, this Captain America plods, plods, plods, populated by a bevy of second-rate TV talent and directed with all the zip of double-strength oatmeal. Christopher Lee guest stars as the villain in the second one, though he's given comparatively little screen time, and let's just say that he doesn't even try to bring his considerable skills to bear on the lame script material. Much of the "action" consists of endless farting shots of Captain America driving around on his motorcycle; and the "character" stuff is strictly out of '70s TV Standard 101. Let's just pretend that this Captain America doesn't exist.

It's all  the more surprising to me, therefore, that the 1990 Captain America, intended for but destined never to make the big screen, is so vilified and demonized by most comics fans. Compared to the TV versions, this is Raiders of the Lost Ark, and although its low budget shows in a variety of ways (more and more so as the picture goes on), I've always rather liked it. It's a straightfaced, honest attempt to present Cap in both of his worlds, the past and the present day, well thought-out and entertaining in an easy way throughout its runtime.

Salinger (yes, the son of that other Salinger) plays Steve Rogers with honesty and conviction. He makes the uniform work because there's nothing campy about his performance. His sincerity has a remarkably calming effect on the rest of the movie. The picture's biggest scene comes early on, as Cap is strapped to a missile targeted at the White House. This could be the stuff of Camp City, and the actor playing the Red Skull certainly tries to go there, but Salinger pulls him back from the brink.

My only real kick against the movie is that Cap goes on ice right in the middle of his very first adventure, which literally means that he never gets to become The Living Legend of World War Two, and that no one in the present-day story has ever heard of him, barring the two or three people who happen to be involved in the plot.

I think it unjust that the picture never got to see theatrical release. But I'm told that it's available online, for free.

Which brings us to Captain America: The First Avenger, which actually bears a lot of similarities to the Salinger version, although with its much larger budget the challenge of keeping things moving is not a problem. One of the similarities is the sincerity, and it strikes me that no movie about Captain America would ever work, no matter what the budget, if the element of sincerity wasn't there. When the 98-pound weakling Steve Rogers is asked, early in the show, "So, you want to kill Germans?" his reply is exactly right: "I don't want to kill anyone. I hate bullies. No matter where they come from."

Indeed, the first two-thirds of the movie are its best game. There's a lot of care taken to establish character, mood, and motivation. Once the picture moves into its final act, it descends into sound and fury, all very well done, but nothing that we haven't seen before. The resolution of the conflict between Cap and the Red Skull is particularly unsatisfying, as Cap isn't allowed to defeat the Skull; the Skull defeats himself.

Hugo Weaving plays the Red Skull marvelously well, by the way; no drapery-chewing here. Although "masked" with human features through the early scenes, once the mask comes off it never goes on again, and were treated to a villain that evokes the work of Jack Kirby and Stan Lee perfectly.

In a bid to lay our doubts about the costume changes to rest, director Joe Johnston launches a terrific musical sequence with Cap in his authentic comic-book duds selling War Bonds on tour. The sequence is canny and great fun, satisfying our desire to see the Golden Age Cap onscreen, while justifying the more practical, muted costume that's introduced later in the film. He even carries his original shield! I was grinning like a kid through the whole thing.

There are quirky, funky retro-modern gadgets and ships throughout the whole picture that lend a nice Republic Serials feel to the action; and in a move that's calculated to leave true Marvelites of a Certain Generation sweeking with glee, Cap gets to lead the original Howling Commandos into action, complete with Dum Dum Dugan in his bowler hat and 'stache, and all the rest of the gang.

Chris Evens does his job, but in the end I like Matt Salinger better as Steve Rogers, even with the padding, and wish that Salinger had had the opportunity to play the part in a movie that's as well-mounted as this one is. Though imperfect, this Captain America gets it largely right, and finally gives us a film version of the character that doesn't come with some degree of embarrassment attached.