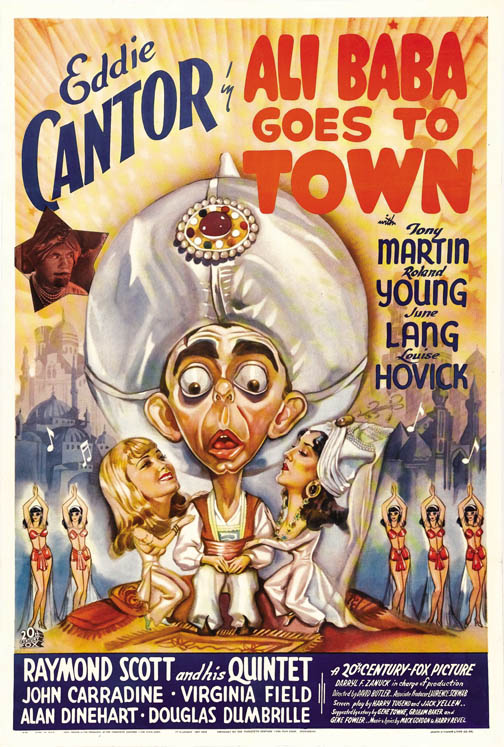 I was overjoyed tonight that TCM would be running a completely new-to-me movie by one of my favorite vintage stars, Eddie Cantor; but, especially now that the movie is over, I'm incensed at the manner in which it was presented. This could have been a great opportunity to introduce Cantor to a populace that largely doesn't remember him. But not once, not even in passing, were his many talents discussed. Not once was it mentioned that he was one of the greatest performers of his age.

Instead, TCM played the Race card, and shit all over the movie (actually taking scenes out of context and ignoring the whole underlying structure of the picture) as being a demeaning portrayal of Arabs by Hollywood.

Say what? I didn't see any Arabs in this movie.

Yet Robert Osborne kowtowed to his guest, Dr. Jack Shaheen (an Arab man who really should be finding better things to do with his time) and took seriously comments that didn't even deserve to see airtime.

For instance: Shaheen described a scene where Cantor witnesses a crowd of Arabs kneeling to pray. Quoth Shaheen: "And Eddie Cantor rolls his eyes!"

Well, I watched the whole movie and I watched that particular scene closely, and guess what? That's not what happens.

We'll talk about that later.

Y'know what? If you want to rail against racism in the movies, find yourself a movie that's really racist -- like D.W. Griffith's The Birth of a Nation, which some of you may recall I hated on big time when TCM ran it a while back: this is a movie that is absolutely vile, yet TCM treated it with reverence. Why? Because it's D.W. Griffith -- Griffith the God of the Movies, Griffith the bigoted little sod. But show a movie by Eddie Cantor -- who I truly believe was not a bigot -- and because no one remembers him, that makes it okay to shit all over his work.

It's true that Cantor makes it easy for the soft-headed to take offense. In every single one of his movies, Cantor puts on blackface and does a contemporized version of a Minstrel number. His movies need big dance scenes and big, exotic locales, so they went from Mexico to Spain to Egypt and, yes, Arabia: but always in a highly stylized, Holloywoodized context, and often in the context of a dream.

Yes, a dream. Dr. Jack Shaheen kept his tone mellow and a relaxed, a pleasant look on his features, but it was clear that he was getting upset about a movie that does not even purport to represent Arabs in any way.

Here's the plot: Eddie is riding the rails to Hollywood because he's a big movie fan. After an opening song that presents the only real message that any Eddie Cantor movie ever aspired to present ("Laugh Your Cares Away"), he falls out of the train and must take Shank's Mare through the desert. He stumbles upon a movie set (that's right, a movie set) and at first thinks he is in Arabia. But it's just Hollywood, making a live-action version of Ali Baba and his Forty Thieves.

Lucky guy, he snags a bit part in the movie. But just when it's his big chance, he takes an overdoes of a sedative (he was run over by actors on horses in the middle of a scene), and falls into a deep slumber.

You read me right. The whole movie is a dream. A drug-induced dream of an impressionable boy-man who's captivated by a fantasy.

Furthermore, as should be obvious to the plainest idiot, the picture's sense of humor isn't aimed at Arabia -- it's aimed at American politics. Casting it into the context of a foreign land is just a way of providing a launching ground for jokes about the New Deal and the American political system.

At one key point, Eddie convinces the Sultan to resign as Sultan and run for President. A very funny American-style campaign ensues in Arabic drag -- this is just exactly the same sort of thing that Gilligan's Island used to do all the time. Eddie gets out there and stumps hard for the Sultan -- only to find that his songs are so popular that the people want to elect him President instead.

Remember, it's a dream.

Well, the Sultan threatens to have Eddie boiled in oil if he wins the election. So, naturally, Eddie goes out and stumps against himself. But even that backfires. "He's got a sense of humor, let's make him President!"

And here's where the scene comes in that Dr. Jack Shaheen found so awfully offensive. It doesn't go like what he says at all.

Eddie's trying so hard to get people not to vote for him. . . when suddenly (in what I thought was a really lovely and respectful shot) the call to prayer is made. The people fall to their knees and begin to pray. There's nothing disrespectful about the shot.

Anyone who takes offense to this can not be a friend of mine.

Ali Baba Goes to Town is a great example of Eddie Cantor's work; I enjoyed it immensely. I think it's almost as good as Kid Millions, my personal favorite of the Cantor Hoover (that's, I say that's a joke, son!) and one that presented another dream-trip to a foreign land. There's even a cameo from Raymond Scott and his Orchestra, playing one of his signature tunes. I was thoroughly entertained from beginning to end and delighted to check off one more movie on my bucket list.

But TCM had to go and play the race card.

It got worse. The next item on TCM's menu was Popeye Meets Ali Baba and the Forty Thieves -- by any standard one of the greatest cartoons ever made. Dr. Jack Shaheen went to particular lengths to drain every last ounce of joy out of it, calling it "deeply offensive."

I'm going to say this only once:

You cannot change the past to suit the political needs of the present, and you cannot corrupt something from the past that is completely innocent and wholly delightful to make racial hay in the here and now.

Dear Dr. Jack Shaheen: You do not need Eddie Cantor and Popeye to make Arabs (and especially Arab men) distasteful to me. You're doing a real good job all by yourself. Jerk.