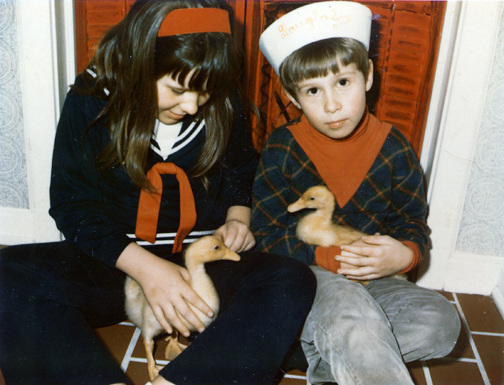 As I plow through the processing of approximately 175 pictures that I scanned yesterday, I'm faced with inevitable memories and emotions, and occasionally tears, although that's rare. I have the work to focus on, and these things are far enough away in the distant past to have lost some of their sting. The moments of hard sadness come when I'm at work, sneaking up on me suddenly when my mind is on other things.

The photos have yellowed with time, and restoring them to their original vibrance has an eerie effect: Some of them look like they could have been taken yesterday. Except for the cars and clothes.

I'm amazed at how much of the basic family furniture is now set up in my house. I see paintings that my mother did that are still with me, and others that are not. I wonder where they went.

I particularly like seeing the jailhouse standing beside the pool at the Edina, Minnesota house, sporting a different coat of paint, and knowing that it came all the way through all those years and four moves to where it now stands.

The picture above is an interesting one. I can't think of any better illustration of how different my sister and I have always been. Note that she has no problem encroaching on my personal space, and that her duck is agitated and scared. I would be, too, in his position.

Typically of my sister, she did not even allow me to name my own duck. She named them both, and that was that, and my parents just stood by and let her do it, they way they always let her have her way and allowed her to boss me around.

The ducks really landed my Dad in the doghouse. He just brought them home one night, without even consulting Mom. They grew up to be perfectly white. One day, they got out of their pen and disappeared into the neighborhood. We drove around and spent the whole day looking for them, but never found them. At the end of the day, they came striding back into our yard, side by side, quacking enthusiastically as if nothing had happened.

I think it was my Grandmother Mel who finally got rid of the ducks. She could not abide animals, even dogs and cats, the ducks were over the top for her. I was so sad when the car drove away with them in a cage on the roof rack.

When my mother was a little girl, my grandmother Mel just "got rid" of my mother's pet dachshund, Schnitzel, one day. I don't think Mom ever really got over that. I think that's why, at the first opportunity, Mom decided that she was going to have just as many pets as she wanted.

Oh, dear, I'm afraid this has all been a bit of a ramble. That's what old pictures do.

Email ThisBlogThis!Share to TwitterShare to FacebookShare to Pinterest
Labels: archeology, past things, scrapbook, the wolf, Wheel of Life