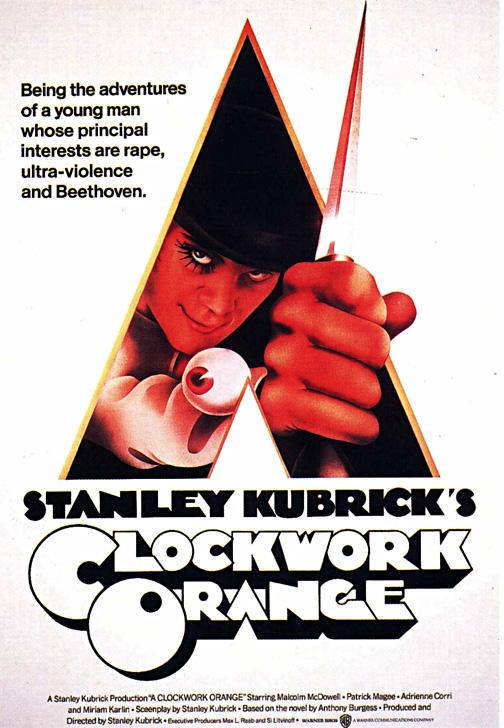 It was not at all a restful weekend as I worked towards hosting five people for dinner at my house, the most ambitious "entertaining" I've ever attempted. That's for another post. When the smoke cleared and the dishes were in the washer and I could finally flop in my comfy chair and begin to wind down, what did I choose to throw in the DVD player? A Clockwork Orange.

Well, it is an oomny, sarky comedy of sorts -- although not one that's meant to actually provoke smekking. It had been about thirty years since I last viddied Kubrick's horrorshow sinny, O My Brothers, and that was just dobby with me. A Clockwork Orange is something you need to see once, not something you're going to want to watch again and again, despite the bravura that Kubrick brought to bear.

Or so I thought. As it turned out, I needed to watch this movie again. First, I'd only ever seen it in a fuzzy, second-generation VHS copy. It was powerful and skillful even then, but the DVD is so much richer and clearer. This is another widescreen movie that needs to be seen that way.

And second, I didn't have the judgement thirty years ago that I have today. I was a much, much younger person, in every sense of the word, than I am now. That's an important difference with a movie that's as tricky as this one is.

I read Anthony Burgess's novel when I was in the eighth grade, at an age when I couldn't possibly grasp what he was trying to accomplish. When the time came to write a school book report about it, all I could do was describe the plot and say that I thought it was a good book. I think my teacher was appalled. For my part, although I couldn't put it into words, I remember being fascinated by Nadsat.

When the movie came out I was too young to see it, even after Kubrick cut something like thirty seconds of footage in exchange for an R rating. [Now that is an odd story that's always intrigued me. Thirty seconds?! I always thought, "It must have been a wow of a thirty seconds!" The current DVD release contains the original, X-rated version, and I was nervous about this. Now having seen it, and I think being able to identify the footage in question, I have to say that the cut scenes are no worse than anything else in the movie and this seems to me more of a case of the MPAA throwing its weight around than anything else.]

By the time I was old enough it was well out of circulation, and I had to wait for the invention of the home VHS player. You can bet that A Clockwork Orange was one of the very first movies I rented (and pirated) -- along with Ralph Bakshi's X-rated Fritz the Cat.

Even then I was really too young for it. I understood the story and its broad general purpose, but did not understand, really not until this week, how deeply manipulative the movie is and how it works on its audience at a subliminal level to corrupt our sensibilities. Roger Ebert hates this movie and accuses Kubrick of being in love with Alec, but he's way off the mark with that theory. Kubrick does, however, want us to feel conflicted, and to that end he allows Alec to become a charismatic figure, without ever diminishing or excusing his behaviour and activities. What we witness in the first act of the movie is appalling, but in Alec's company it's also -- dare I admit it -- kind of fun.

That's what I didn't understand all those years ago. It's exactly what people have reacted to over the years,  exactly why the movie is so disturbing, and some critics, like Ebert and Pauline Kael, resented it. Perhaps they are right. Especially in the last two decades, there have been many more graphically and sexually violent movies than this one. But Kubrick is an artist, not a sadist. Watching A Clockwork Orange is a bit like being subjected to the Ludivico Technique yourself.

I never noticed until it was pointed out to me in one of the extra features, but it starts in the opening shot. There is McDowell with his magnificent leer and that unnerving eyelash -- and he raises his glass of milk-plus and toasts the audience! When asked why he did that, McDowell replies, "Well, the audience is about to spend two hours inside the mind of a very nasty person, and I thought, 'Good luck!'"

And it's true. The only character in A Clockwork Orange that the audience gets to know in an intimate way is Alec. Kubrick is being deeply subversive. But it's fair and correct, because that's how the novel works, too.

The most disturbing word in Nadsat is krovvy, blood. It's derived from Russian but the addition of the "vy" makes it sound like "gravy" which is just what Burgess wants it to sound like: for Alec, bloodletting is a savory activity.

Burgess was an enormously prolific writer, and A Clockwork Orange isn't even his best novel, but it's one of those things that defines its creators whether they like it or not. There are signs that Kubrick regretted ever having made the movie, though he never completely disowned it.

I still own my copy of the novel, but it's the infamous American edition that's missing the "redemptive" final chapter, the version of the book that Kubrick based his movie on. I don't know how a publisher, any publisher, can get away with just lopping off the final chapter, on a whim, of any novel: but in doing so, they decided the fate of the film. It's an act of violence against a book about violence. Perhaps now is the time for me to track down a fresh copy and see what Burgess really intended.