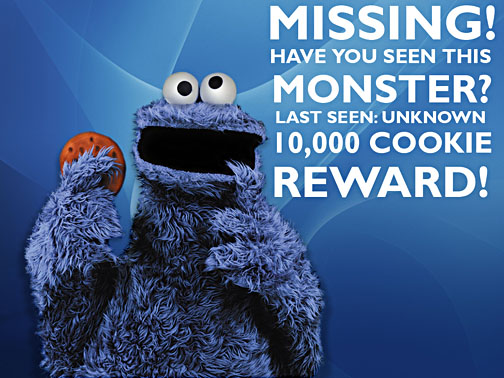 When Children's Television Workshop announced their new "curriculum" for the next season of Sesame Street, Cookie Monster and Elmo were both on hand to help out with with the press conference.

Except that something fishy was going on. The Cookie Monster in attendance was not the real Cookie Monster, but a blatant impostor!

What have they done with the real Cookie Monster? Who is this stranger who has taken his place?

Could it be that the real Cookie Monster is in rehab somewhere, trying to kick his addiction to crunchy backed sweets? Is he confined to the special Puppet Wing of the Betty Ford clinic, suffering from Delirium Tremens as he withdraws from sugar?

Or could it be something more sinister? You've seen it before in Bad Movies: what if the new Cookie Monster wanted to be The Cookie Monster so badly that he abducted The Genuine Article and took his place in the 'hood? The real Cookie Monster could be tied up and gagged in the trunk of an old Mercury, waiting to be thrown into the Car Crusher!

I'm sure that the executives at Children's Television Workshop are no different for those in any other company. What if they just decided one day that the real Cookie Monster was getting too old and long in the tooth? What if Cookie Monster showed up for work one day and found a pink slip in his mailbox? Poor Cookie Monster! Out of work without warning, after all those years of busting his butt to entertain and educate the little rugrats, while a young whippersnapper gets all his glory (and all his cookies)!

Especially in this economy, it would be danged hard for an unemployed Cookie Monster to find work, I don't think he'd stand a chance at getting a role in the latest revival of Les Miserables, for example. He might have to call in a debt, if he has one, with Yoda and try to get something in the next Star Wars movie. Remakes are really big right now. I can definitely see Cookie Monster as Rick in the remake of Casablanca. Then Again, Cookie Monster is a skilled comedian. I'd like to see him as Alvy Singer in the remake of Annie Hall. And who knows? If Daniel Craig gets tired of playing James Bond, I think Cookie Monster would be a natural in that part! If all else fails, I hear the porn industry is really strong right now out on the west coast. Cookie Monster is pretty well used to being filmed naked.

If you were a Job Coach, what other walks of life could Cookie Monster find work in? I don't think he'd last long at MacDonald's or any other food-related branch of the service industry. And I don't think I'd want him working on my plumbing. On the other hand, Macy's always liked Cookie Monster and even made a balloon of him for the parade. Maybe they could find something for Cookie Monster in the Men's Department, or, better yet, Kitchenware. I bet that Cookie Monster has a lot of experience with baking utensils.

D'you think that Cookie Monster could find success in the corporate world? I'm not sure. Cookie Monster is much more kind-hearted than the other monsters in that line of work.

In the same way (and for the same reasons) that no one can voice the Warner Brothers stable of characters as well as Mel Blanc, June Foray, Stan Freeberg and Arthur Q. Bryant (and even Mel shouldn't have attempted to voice Elmer Fudd after Bryant's death), no one should be allowed to assume Frank Oz's many characters. No one but Caroll Spinney should be allowed to play Big Bird and Oscar. The little tykes may not know the difference, but I do.

You can't replace the Genuine Article with a cheap imitation and expect me to swallow it. As far as I am concerned, when Jim Henson died, Kermit and Ernie and Rowlf the Dog and Doctor Teeth and the Swedish Chef and all the other characters that he created died with him.

Some things are just unique, and cannot be replaced, rewired, reconstituted, re-animated or renewed. We mourn when they are gone, because the world is a little bit emptier and sadder without them. But it only makes things worse to try and stuff the empty puppet shell with hot air and pretend that nothing happened.