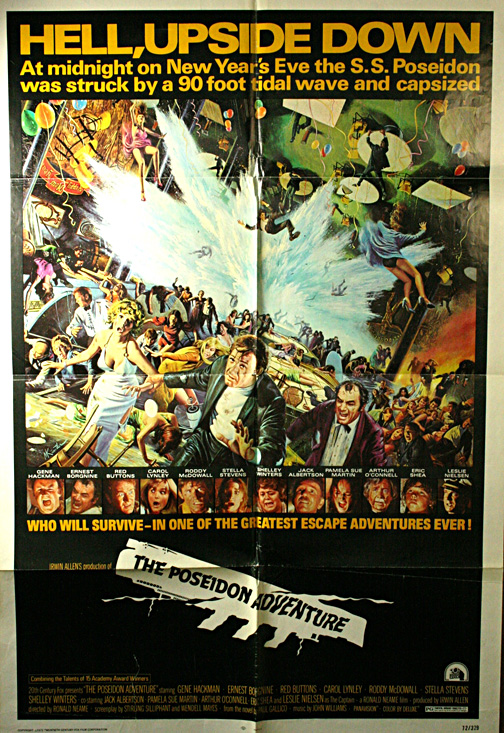 Until I watched it last night, I could think of no logical reason why I ordered up a copy of the original 1972 Poseidon Adventure (or, as Mad magazine parodied it at the time, The Poopsidedown Adventure). I've been giving "The Morning After" a lot of play recently, but that couldn't be it. The picture has Ronald Neame's name on it, and he's a director that I respect, but that's hardly enough reason. I was an impressionable 14 years old when it came out, and have only ever seen it once before (on broadcast TV, all cut up and full of commercials), but those aren't reasons enough either. I honestly thought that I must have been out of my mind at the time.

That feeling did not go away as the puerile opening scenes unfolded. Of course the characters are all cardboard cut-outs, but there's an underlying coarseness and chauvinism to the script that hasn't aged well. My thoughts, such as they were, had nothing to do with the largely inept character set-up. I thought, Ronald Neame directed this? and felt nothing but sympathy for all of the actors. I thought, I miss Red Buttons (what I really meant, I realize just now, is that I miss Character Actors in general) and I wonder how old Ernest Borgnine was when he made this? and Whatever happened to Stella Stevens? and Are those things real?

I thought, Oh, that kid is really annoying and That Pamela Sue Martin is one lousy little actress and Why did they cast Gene  Hackman in this part? and I wonder who's actually singing for Carol Lynley? It ain't Maureen McGovern.

And then we have Leslie Nielsen captaining the ship, in one of his last "serious" roles. Once he started doing comedy, and doing it well, all of his previous serious roles suddenly became comedy as well! The minute he appears on the bridge, you start to chortle and know that this boat is going down soon.

I realized that Ronald Neame may be the director, but this is first and foremost an Irwin Allen picture, and it has his fingerprints all over it.

Then, not a moment too soon, the wave struck.

Suddenly, the Ronald Neame that I know, the one who knows how to frame a shot and tell a story and work with actors, suddenly that guy was back. And as the rest of the picture unfolded, I realized that so-called "disaster" movies aren't really about the disaster itself, but the physical and emotional hardships that follow.

And the cast, all of them, are very good at this sort of thing. This was when Red Buttons was discovering that he could do much more than comedy relief. As in They Shoot Horses, Don't They?, he struggles and suffers with the best of them.

They climb. They crawl through muck and fire and past the bodies of the crew. They look backward, and see the water catching them up, drowning everyone they left behind. They begin to die (Roddy McDowall makes an early exit, along with his fake Scots accent). The boat takes on a character of its own, presenting obstacles at every turn, slowly closing its fist around the small extended family (for that is what they are now. They didn't choose to be a part of this family, but then, who does?).

I did find myself getting caught up emotionally in all this, and had no delusions anymore about why I wanted to see it again and what is exactly the appeal of this genre to audiences. It wasn't the heavy-handed "message" that the movie hammers on every chance that it gets: "We've got to keep going, we can't give up." It was the feeling of all this scrabbling, clawing, clinging, clutching; the family dragging itself most painfully up level by level, with the torrent engulfing the places they just left, literally obliterating their past behind them.

We may not look as bad as Borgnine & Co. do when we finally crawl through our personal disaster movies, but that is exactly, exactly what it feels like.